Someone recently asked me...

how many books I've read for this blog and did I have any particular favorites. Well, I've been thinking about that and while I haven't counted the number of books I read and reviewed, it's been a lot. And I've learned something from each one - maybe not something directly in the text, but the text roused my curiosity and lead me to Google or to the library or to one of my reference books for more information.

And for the most part, I've stuck to my original plan of only reviewing books I like. There have been some exceptions, but they are few and far between. All this led to the question: do I have any favorites? It turns out that I have a number of favorites - books that I couldn't wait to read and that still stand out in my mind. And after revisiting each book I've reviewed, I was really surprised by the results. Here, then, are my favorite works of fiction, 10 novels and one picture book: 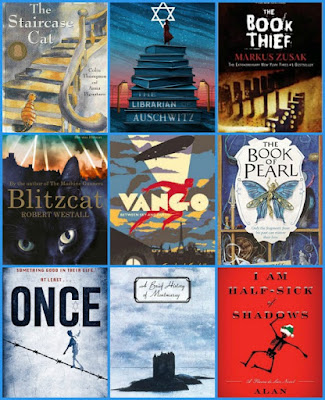 The Staircase Cat by Colin Thompson - not a WWII story per se, this is a heartbreakingly poignant story about a family cat, Oskar, who lives a comfortable life in an apartment building until war comes and forces his owners to leave. Oskar survives the war and alone remains in the house with the ghosts of all those who once lived in the building.

The Librarian of Auschwitz by Antonio Iturbe - a powerful novel blending fact with fiction, it is the story of Dita Adlerova, 14, transported to Auschwitz in 1943 with her parents, part of a group of Jewish prisoners transferred from the Theresienstadt Ghetto and receiving special treatment in Birkenau. There, she is put in charge of the library of 8 precious books that must be kept hidden from the Nazis within a building used as a secret school.

The Book Thief by Markus Zusak - an homage to the power of words, and narrated by Death, this is about a young girl's desire to learn to read, the communist foster family with whom she lives, and the Jewish man they hide from the Nazis in Hitler's Germany.

Blitzcat by Robert Westall - this was the second book I read for this blog, and it has remained a favorite ever since. It is the story of a female black cat, mistakenly named Lord Gort, who goes on a journey across southern England looking for her human, a pilot in the RAF, and all the people she meets along the way whose lives are impacted by her being there just when they need her.

Vango by Timothée de Fombelle
#1 Vango: Between Sky and Earth - this is a epic adventure/mystery story that deftly mixes fact and fiction together. At 19, Vango, a master of disguise and escape, finds himself on the run for a crime he didn't commit. The main action takes place between April 1933 and Christmas Eve 1935, when Hitler and Stalin are both in power. But by the end, Vango (and the reader) are wondering who he is and why is he the subject of an international manhunt.

#2 A Prince Without a Kingdom - Vango is still on the run in this sequel, and after more epic adventures, all is revealed. It's hard to talk about this book without spoilers, but it is every bit as riveting as the first book. The time frame is here, running from 1936, through WWII and the Holocaust. In my review, I wrote I regretted Vango's story isn't a trilogy, and I still regret it, but than the author gave us another wonderful book...

The Book of Pearl by Timothée de Fombelle - this clever mix of fact and fantasy, it is the story of Joshua Pearl, who is forced to leave the fairy land he came from, and mysteriously finds himself in 1936 France, and taken in by a famous marshmallow maker. As his memories of his home and the girl he loved begin to fade, Joshua begins collecting items in an attempt to find his way home. Meanwhile, the Nazis are on the march in Europe.

Felix and Zelda family of books) by Morris Gleitzman - Felix, a young Jewish boy leaves the safety of the French orphanage his parents put him in and sets off to find them. Along the way, he meets Zelda, 6, and the two travel together throughout Nazi-occupied Poland. Each book follows the events of the book that came before it, chronicling Felix's struggle to survive, to fight the Nazis and to create a new family for himself. Felix's story is heartbreaking yet poignant at the same time. The only book I didn't like is Book #4, Now, which takes place in 2009 and Felix is 80 years old.
#1 Once
#2 Then
#4 After
#5 Soon
#6 Maybe 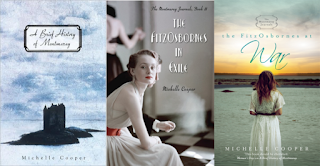 The Montmaray Journals by Michelle Cooper - The story of the FitzOsborne family begins in 1936 on the small island kingdom of Montmaray, which they live in a run-down castle. As European politics and the Nazis begin to impinge on their idyllic world, the Fitz-Osbornes are forced to leave Montmary for life in London. And while Book #2 is a nice look at high society in 1930s London, once again the reality of politics and Nazis are ever present there. Book #3 finds the FitzOsbornes fighting the Naizs at home and abroad.
#1 A Brief History of Montmaray
#2 The FitzOsbornes in Exile
#3 The FitzOsbornes at War

Flavia de Luce Mysteries by Alan Bradley - these books are a pure indulgence for me, even though they just barely have anything to do with WWII, and not all of them, at that. Flavia is an 11 year old sleuth, using chemistry to solve all the murders that seem to occur with relative frequency in Bishops' Lacey.
#4  I Am Half Sick of Shadows
#5  Speaking from Among the Bones
#6  The Dead in Their Vaulted Arches
#7  As Chimney Sweepers Come to Dust
#8  Thrice the Brinded Cat Hath Mew’d
#9  The Grave’s a Fine and Private Place
#10 The Golden Tresses of the Dead 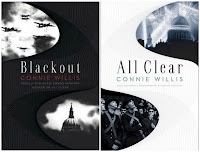 #2 All Clear
And although I don't often re-read books, I re-read these recently and they are still as good for me as ever.

What are my favorite non-fiction books? I'll get back to you on that.
Posted by Alex at 4:03 PM