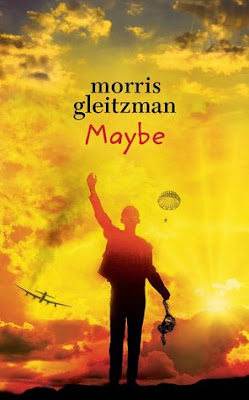 When last I left Felix and Gabriek in Soon, Book 5 of the Felix and Zelda family of books, I wrote that I hadn’t really gotten a sense of closure when I finished reading but perhaps that is as it should be. WWII was over and I was pretty sure it was the last in the Felix and Zelda series. Well, as you can see, I was wrong.


Maybe is the 6th and next to the last book in the series (how do I know there’s going to be a 7th? Because I read that all-important Dear Reader from Morris Gleitzman at the end of the book).

It’s 1946, and Felix is 14 years old. He and Gabriek are traveling back to Gabriek’s farm with a very pregnant Anya. What a surprise when they arrive and discover a group of men rebuilding the farmhouse the Nazis had burned it down in After (Book 4). A neighbor has claimed the land as his own, and soon Felix, Gabriek, and Anya are on the run again. Anti-Jewish hate is still strong, and Gabriek is considered a traitor for having hidden Felix during the war.

In an attempt to straighten things out, Felix, Gabriek, and Anya go to town, where they are soon surrounded by a large, angry mob, including Felix’s old enemy, the sadistic Cyryl (Then, Book 2). A fight breaks out and both Felix and Gabriek are seriously injured before it is broken up by an Australian air man and his female driver, a woman named Celeste. Unfortunately, the Australian is seriously shot, but with his partisan training as Dr. Zajek’s medical assistant (After, Book 4), Felix is able to save him before being knocked unconscious himself.

When he wakes up, Felix finds he is at an air base set up by the Australian Air Force along with Anya and a still unconscious and seriously injured Gabriek. Eventually, the three are able to leave hospital and stay with Celeste, who has her own war horror story. Felix is introduced to a man named Ken who wants to take him back to Australia as a war survivor to show Australians what they were fighting and dying for, and to help repopulate the country after suffering so much loss of life in the war. Felix isn’t too keen on the plan because he would have to leave Gabriek and Anya behind until he completely healed and she has her baby.

Nevertheless, Felix reluctantly agrees to fly to Australia on condition that Gabriek, Celeste, Anya and the baby will follow by ship as soon as possible. The plane is a Lancaster, a heavy British bomber, and it doesn’t take long to discover that there is a stowaway on board. And while Felix and Anya finally think they are on their way to a safe place, their story is far from over. And once again, Felix is faced with a life and death decision similar to the one he made in Once, Book1, when he and 6 year old Zelda jumped from the train that was taking them to a concentration camp and certain death. Will Felix and Anya survive their jump?

Maybe can be read as a stand alone novel or in the sequence in which it was written. Gleitzman includes enough background information for readers new to the series to know what they need to know about Felix, Gabriek, and Anya’s past. And he continues exploring themes of family, friendship, as well as the aftermath of war (including kindness, hate, help, loss, and revenge), and now, emigrating to a new country.

You would think that by the sixth book about the same character the appeal and quality would have worn thin, if not worn out. Not so with the Felix and Zelda family of books, as Gleitzman calls them. Felix is four years older than when the series began, and yet, he is still the same optimist with an good helping of naivety thrown in despite the fact that his life has been full of false hopes and lots of  maybes so far. And I can’t help but wonder why he isn’t angry, bitter, and resentful given what he has gone through and the people he has loved and lost. It is a credit to Gleitzman’s writing that the series is still so vibrant, and even more relevant in today’s world where intolerance of others is on the rise.

It has been an interesting journey with Felix and the various people he met along the way. I am looking forward to reading Always, the 7th and final book, in which Gleitzman says he will bring Felix’s story full circle. I can't help but wonder how.

Maybe has already been released in Australia and Britain, but not yet in the United States. Once again, I was anxious to read it, and bought a copy from Book Depository (hooray for free delivery worldwide), and couldn't put it down once I started reading.