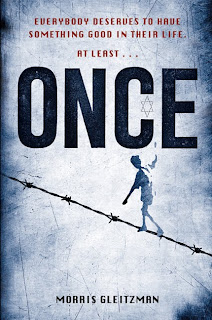 Once I read a story about a 10 year old Jewish boy named Felix who lived in Poland in 1942 and I felt a terrible sadness as I read.

Once is very poignantly narrated by Felix. He tells the reader that he had been placed in a Catholic orphanage by his parents, booksellers in Poland, and has lived there for three years. He also tells the reader that he likes to make up stories and is considered by others to be quite good at it. Felix always carries a notebook in which he writes down his stories and hides it inside his shirt for safekeeping. Once he found a whole carrot in his soup and told himself that it was a sign that his Mum and Dad were coming back to get him. But they never show up. When Nazis suddenly show up at the orphanage to burn the books in the library, Felix remembers the time they destroyed the books in his parent’s bookshop and reasons with himself that the Nazis are only after books. He decides to leave the orphanage and find his Mum and Dad, to warn them that their books are in danger.

As Felix goes along looking for his parents, he starts to tell himself stories about what he sees. For example, a few days after he begins his journey, Felix comes across an empty house, with the kitchen stove still burning and half eaten meals on the table. He tells himself a story about the people who live there and why they have left so suddenly:


In the distance I hear faint gunshots.
Of course. That explains it. They’re out hunting. They must have seen some rabbits, grabbed their guns and gone after them in a big hurry. (pg33)

The reader of course knows why the house is empty and what the gunshots are even if Felix doesn’t.

Felix is a clever boy who not only creates his own stories, he also uses the knowledge he has acquired from other stories he is familiar with. As his search for his Mum and Dad takes Felix towards an unnamed city, he sees a house on fire and the bloody owners lying outside on the ground. Not sure if they are dead or alive, he picks up a feather and holds it in front of their noses: “It is how you tell if people are dead. I read it in a book once.” (pg.55) This is also the house where he finds six year old Zelda and the place where a very scary suspicion of reality begins to occur to Felix:


A little kid. What sort of people would kill a little kid just for the sake of some books? A horrible thought grows in my throbbing head. What if us Jews aren’t being bullied just because of books? What if it’s because of something else? (pg 56)

Felix continues his journey now accompanied by the traumatized Zelda, to whom he continuously tells stories. As they continue on towards the unnamed city, they run into a large group of weary men, women and children walking along the road, all wearing armbands with Jewish stars, and being escorted by Nazi soldiers. At first, Felix thinks they are all Jewish book owners. Forced by the Nazis to join the group, another bit of reality scarily intrudes into Felix’s thoughts after asking one of the men if he is a book lover, then wishes he hadn’t:


Not just because I’ve made a suffering Jewish man feel upset at the sight of a crazy kid. Also because I’ve got a horrible suspicion I know the answer to the question.
Maybe it’s not just our books the Nazis hate.
Maybe it’s us.

When Felix and Zelda finally arrive in the city, they are taken into hiding by a dentist who is already taking care of several other children whose parents have been put on transport trains. The dentist, Barney, is a character modeled after a man who actually did take care of Jewish orphans. Janusz Korczak was a Jewish children’s doctor and well known author. When the Nazis rounded up the orphans he was caring for to transport them to Treblinka, they offer Korczak sanctuary. He refused to leave the children, choosing instead to go to his death with them. In his Afterword to Once, Gleitzman explains that Korczak became his hero after reading about him.

Once is the story Felix tells us about his life as a child in this particular time and place in the history of the Holocaust. His journey to find his Mum and Dad also turns out to be Felix’s journey from innocence to realization about the situation of Jews under the Nazis. The book is geared for readers aged 11 and up and I would highly recommend it for that age group. Younger readers, even those who have high reading levels, may still find it too disturbing.

I was told that I would want to immediately read the next two books, Then and Now, in the trilogy Gleitzman has written about Felix and that has certainly turned out to be the case. Unfortunately, they are not available in the US yet.

For another review of Once, see:
http://fourthmusketeer.blogspot.com/2010/06/book-review-once-by-morris-gleitzman.html

Penguin has published an excellent teacher’s guide for Once at:
http://www.penguin.co.nz/webfiles/PenguinGroupNZ/files/OnceTeachNotes.pdf

So much of Once centers around the idea of storytellers and storytelling. It reminded me of the poster that bore a message President Roosevelt sent to the American people about the Nazi book burnings. 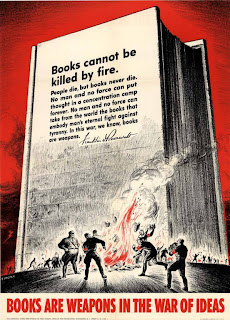 For more information on this poster  see:
http://snuffy.lib.umn.edu/image/srch/bin/Dispatcher?mode=600&id=mpw00264