A Prince Without A Kingdom by Timothée de Fombelle, translated by Sarah Ardizzone 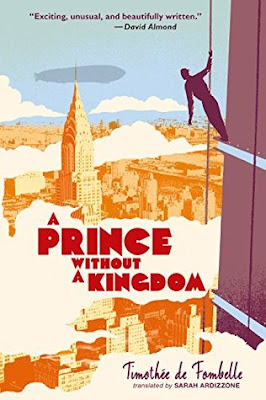 Back in May 2014, I review Vango: Between Sky and Earth, the story of a young man who is trying to solve the mystery of who he is and why there are people who want him arrested or dead.  Set in the early 1930s, I wrote that this was historical fiction at its best and I couldn't wait to read the sequel.

And I am happy to say, the sequel, A Prince Without a Kingdom, is every bit as good as Between Sky and Earth.  The story begins shortly after a brief recap of what happened in Book I, this novel opens in 1936, shortly after the first one left off.  Vango is still trying to solve the mystery of who he is, while he tracks the person he believes had killed his parents back in 1915.  Another question that hangs over this novel - what happened to Vamgo beloved Mademoiselle, who had raised him and cared for him after his parents death on the island of Salina off the coast of Sicily?

Now in New York Vango meets up with his old friend and mentor, Father Zefiro, founder of a hidden monastery located on the island of Arkudah.  Zefiro has been hunting for Voloy Viktor, a Soviet arms dealer and murder, and a master at disguise who also goes by the personas Madame Victoria and Vincent Valpa.  Believing he is now in New York, Zefiro sets up a stakeout in an unfinished building.

Vango is on his own hunt for Giovanni Cafarello, one of the three men who murdered Vango's parents, stealing thier fortune, and who knows the secret of Vango's identity.  But the man incarcerated in Sing Sing prison as Gio Cafarello claims right up to his execution that he is not Cafarello.  Is it possible that Vango came so close to knowing the truth and having his revenge, only to miss it by moments? Or not?

There is just so much to this novel, that it makes it hard to write a fair review without spoilers, and I hope I haven't included any by accident.  A lot of time a sequel doesn't live up to a reader's expectation based on the first book, but I can honestly say that this not only met my expectations, but even surpassed them.  And yet, it is also a stand alone novel.  There is also a helpful list of the cast of characters at the beginning, in case you forgot who is who and why from the first book, or if they are new to you.

And, like the first book, A Prince Without a Kingdom is full of adventure, intrigue, mystery, tension and suspense and coincidence, nail-biting coincidence most times.  The plotting is brilliant, the characters - and there are a lot of them - are well drawn, believable, diverse and global.  In fact, the whole story is global - New York, Moscow, Edinburgh, the Aeolian Island on the coast of Sicily, and New Jersey (yes, Lakehurst, NJ was the landing area for the zeppelins back then and zeppelins are an important part of both novels, including the Hindenburg).  And de Fombelle moves his characters and settings like the most perfect chess game ever.

A Prince Without a Kingdom isn't necessarily told in chronological order, because of its many flashbacks, but though it may sound confusing, isn't at all difficult to follow what is happening.  And the mix of historical figures and events with his fictional characters and events adds to the excitement and interest throughout the novel.  The time frame of the novel begins in 1936 and goes through WWII and the Holocaust.

I can say that the writing is fast-paced, and beautifully lyrical, yet the story proceeds at a nicely tempered pace, never overwhelming the reader.  Once again, Sarah Ardizoone has given us a flawless translation from the original French and succeeding in carrying forward the flavor and feel of de Fombelle's storytelling.

My only regret is that the story of Vango isn't a trilogy and I have to say good-bye to him.

Email ThisBlogThis!Share to TwitterShare to FacebookShare to Pinterest
Labels: Mystery, YA