The Staircase Cat by Colin Thompson, illustrated by Anna Pignataro 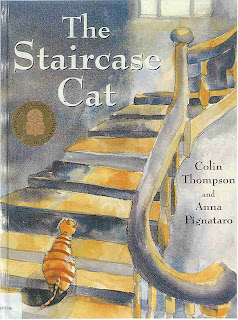 ﻿I don’t like to write about books that are not easy to obtain, either in the library or bookshops, but I have decided to make an exception in the case of The Staircase Cat. My reason for making this exception is simply that I think this is a picture book worth reading and, if it is never reprinted and you ever come across it somewhere or can get it through Interlibrary Loan, by all means get it and read it.
The war in The Staircase Cat is not specifically called World War II, but it could be, in fact, it could really be about any war. This is because it is a story about the ways in which war, all wars, can disrupt and destroy the lives of ordinary people and their animals.

Oskar is an old cat living in the bombed out shell of an apartment house and now:

"There are ghosts in the house. The old cat could feel them and sometimes on moonless nights he could see them too. The ghosts of men and women and children who had once lived in the house, the ghosts of their cats and dogs, moved in and out of the deserted rooms. But there was no peace for them among the fallen plaster and broken glass."

The story is told by a third person omniscient narrator who takes the reader back to the days before ghosts populated Oskar’s world. It was a time when the apartment house had been a happy place and a very contented Oskar had lived with the caretaker and his family, sleeping in a cozy box behind the warm stove.

Then the caretaker’s daughter went away; and bombs began to fall. The house began to grow cold, people started to leave. More bombs fell and soon the building was in ruins and everyone was gone. Oskar stayed, living on what he could scavenge, managing to fare better than the abandoned dogs.

Eventually the bombs stopped. All around him, buildings are fixed up and people moved back in, but not where Oskar lives. Grown old now, Oskar lives among the ghosts of another time, having forgotten the cat joy of sitting in a lap, being stroked and loved. He has even forgotten his name.

Until one day at young man and woman come to the house. The young woman, of course, is the caretaker’s daughter and when she sees Oskar, she tells the man he looks just like Oskar, her old cat. When he hears his name, the cat remembers who he is and he remembers the woman, too, by her smell.

Carrying Oskar out of the building to take him home with her, the caretaker’s daughter poignantly observes “All those years, said the woman. “I can hardly believe it. All those years with the ghosts.”

The simplicity of the narration in The Staircase Cat is one of those things that makes this such a compelling story. Thompson uses straightforward declarative sentences, with simple vocabulary to describe how life changes as war comes and destroys everything thing in its path. And the use of an omniscient narrator allows Thompson to keep Oskar a cat; much the same way Robert Westall was able to keep Lord Gort a cat in Blitzcat, eliminating the need for any anthropomorphizing and giving the story a true sense of realism.

Colin Thompson often illustrates his own books, but for The Staircase Cat he collaborated with Anna Pignataro. Ms. Pignataro’s watercolor pictures, predominately in grays and oranges, are wonderfully rendered and truly capture the haunted feeling that permeates this book.

This book is recommended for everyone.
This book was borrowed through Interlibrary Loan from the Morningside Branch of the St. Lucie County Library System.

The Staircase Cat was
Shortlisted Picture Book of the Year Children’s Book Council of Australia in 1999 and
Shortlisted YABBA Children’s Choice Award in 2000.

Warning - this book is a tearjerker. I read it sitting in the Rose Reading Room of the NYPL, a very dignified place (as you can see), among scholars, researchers and kids doing homework, with tears rolling down my cheeks.