Books for Children of the World: The Story of Jella Lepman by Sydelle Pearl, illustrated by Danlyn Iantorno 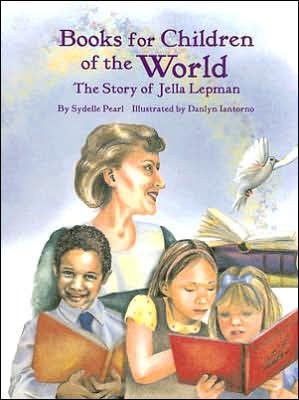 Imagine you are a German Jew who managed to escape Hitler's Germany during the war.  Now, the war is over, but you have been asked to return to Germany by the United States Army to assess what the German children living in that now decimated country need to live a better life.   After all that happened to Jews in Germany, could you have done it?  It would indeed take a strong, caring, forgiving person to embark on such a task, but that is exactly what Jella Lepmaan did.

As Jella traveled through Germany in an army jeep, she saw that the children needed so much - clothing, food, homes, warmth.  But they also wanted books.  She spoke to the General at army headquarters where she was stationed about an exhibition of children's books from around the world.  The General agreed this was a good idea and, night after night, Jella wrote to publishers to ask for books donations for the exhibition.  She called her letters doves of peace.  And, amazingly, even after what Hitler had done to the world, publishers around the world did respond.

The books were great, but were for an exhibition, not for the children who wanted them.  So, Jella decided to translate The Story of Ferdinand by Munro Leaf into German.  Then she had it printed - 30,000 copies on newsprint and a few days before Christmas, they were handed out to Germany's children.

That was just the beginning.  By 1949, Jella's first children's book exhibition had grown into the International Youth Library in Munich.  This research library still exists today and still collects children's books from around the world.

Sydelle Pearl's Books for Children of the World: The Story of Jella Lepman is a beautifully written homage to a very courageous woman and the library she founded.  Lepman believed that just as her letters were doves of peace, books were messengers of peace and the idea of peace is a clear message in her work.  Pearl is herself a librarian and it is easy to see that she believes in the power of books.

Illustrations add so much to a book and those of Danlyn Iantorno are no exception.  These bold, colorful realistic illustrations, which appear to have been rendered in oil paint, capture both the bold spirit of Jella Lepman and the varied emotions of the children.  I also thought that the tones of the colors used reminded of picture books and readers from the late 1940s and 1950s reflecting the Zeitgeist of that particular time.

Be sure to read the Author's Note at the end of the book for more information about Jella Lepman and the International Youth Library.  There is list of selected sources as well, should you be inclined to explore Lepman and the library further.

Bear in mind that this is a historical biography and not really a picture for young readers.

This book is recommended for readers age 8+
This book was provided to me by the publisher.

There is a wonderfully informative lesson plan based on Books for Children of the World: The Story of Jella Lepman which, though produced in 2011, is nevertheless still very useful and  can be found here.

Nonfiction Monday is hosted this week by Wendie at Wendie's Wanderings