A Brief History of Montmaray by Michelle Cooper 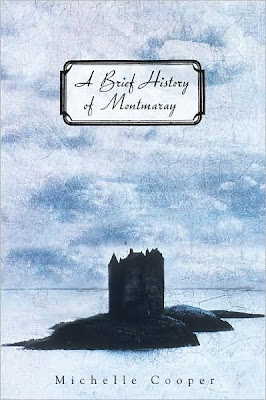 The brief history referred to in the title of this novel is the entries made by the main character, Sophie FitzOsborne, after she receives a diary for her 16th birthday from her brother Toby.

Montmaray is a very small fictional island in the English Channel at the mouth of the Bay of Biscay. The FitzOsbornes are the reigning royal family on the island. However, its royal residents only include, besides Sophie, her 10 year old tomboy sister Henry (short for Henrietta), her beautiful cousin Veronica, 17 and Veronica’s father King John. They live in a crumbling castle at one end of the island, and, despite being royal, they have no money. Rosemary Chester also lives with the FitzOsbornes, caring for the King, who is now quite mad most of the time. Rosemary’s son, Simon, lives in London, working for the family lawyer. Toby FitzOsborne also lives in London, where he attends boarding school. Sophie has a serious crush on Simon, though he doesn’t seem to know it.

There is also an Aunt Charlotte in London, who never makes an appearance in this novel. She has some money, and wants to present her two nieces Veronica and Sophie to London society during the social season.

On another part of the island, the village, live their subjects, three adult and one child, who play a somewhat integral part in the beginning of the story.

Most of the first half of the novel is taken up with family and island history. Sophie also chronicles all the daily events that occur on the island, the ships that come by bringing mail and supplies, as well as news of political events happening in Britain and Europe. The Nazis have been in power for almost 4 years and the Spanish Civil War is still raging, and King Edward VIII of England chooses abdication in order the marry an American. When Simon comes to visit, he and Veronica have very heated discussions about the role the island should play in Europe’s politics, and about different political systems that are in conflict with one another. The animosity these two young people feel towards each other nicely echoes the kinds of current events taking place among the various countries.

After one of the villagers dies, the remaining three subjects decide to leave the island and live in England. Not long after, a boat arrives on Montmaray and two Germans, Otto Rand and his assistant Hans Brandt, disembark,. Though they are wearing Nazi uniforms, Herr Rand informs the FitzOsbornes that he is there not on official German business, but for personal reasons. He is a medieval scholar from Berlin and has come to Montmarmay to request permission to look at the vast library in the castle in hope of discovering something about the Holy Grail. They are refused entry, but sneak in one night anyway. This rash act of theirs spells trouble for the FitzOsbornes and the island where they had always felt so safe and secure and life will never be the same. There is much more, but to go into any more detail would spoil the story.

This is a character-centered novel in which everything is filtered through Sophie’s eye as she writes in her diary. Nevertheless, the main characters are well-developed and sympatric, even if they do ultimately challenge our sense of right and wrong when you are faced with an enemy like the Nazis. Sophie’s youth and inexperience serve as good devices for Cooper to present a great deal of historical information. Some of this information is factual, some of it is not, but the difference is made very clear. Through Sophie’s entries we also see the foreshadowing of actual things to come within the fictional story of the FitzOsbornes. So much of what occurred in the 1930s led to World War II that I think pre-war books like this are an important part of understanding how and why it happened.

And of course you will hear A Brief History of Montmaray compared to I Capture the Castle by Dodie Smith, another wonderful book. They are definitely similar in some way, particularly the teenage diarists observing events around them. But Michelle Cooper has created her own distinct characters, distinct plotline and a distinct, extensive history for the island and its inhabitants. Still, if you like one, you will most likely like the other.

My only problem with A Brief History of Montmaray was the cover. It gives the impression that Montmaray is much smaller than it actually would be. However, the author, Michelle Cooper, has a website that includes information on her historical resources, maps of the island, how the castle is situated on the island and a floor plan of the inside of the castle and a very nice downloadable teaching guide. These are all very handy to have while reading and may be found at Michelle Cooper

This is a wonderful story; the kind that I hate to put down and can’t wait to get back to. And when I reached to end, I was comforted with the knowledge that there is a sequel, The FitzOsbornes in Exile, but unhappy to discover it will not be available in the US until April 2011. Without reservation, I would highly recommend this book to all YA readers.

A paperback edition of A Brief History of Montmaray will be available in the US in March 2011.
This book is recommended for YA readers.

This is book 1 of my YA Historical Fiction Challenge hosted by YA Bliss
The book was borrowed from the Inwood Branch of the NYPL
Posted by Alex Baugh at 10:33 AM