We Are Wolves by Katrina Nannestad 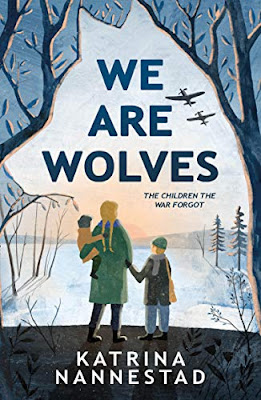 Despite the war, the Wolf family - Opa, Oma, Papa, Mama, Liesl, 11, Otto, 7, and baby Mia - had lived a relatively comfortable life in East Prussia. But now it is October 1944, the Russian army is advancing westward, and in desperation, Hitler has called up teen boys, older men, and those who are disabled to fight to save his Reich. Papa, who was injured in WWI, is drafted and by Christmas Eve, he is missing in action.

Soon after, the family learns that the Russian army has broken through German lines and are advancing in East Prussia. Everyone to told to quickly flee because it was well known that the Russians have been doing terrible things to German men, women, and children, as they advanced. Luckily, Opa manages to find an old car, but that only takes the family so far, and soon they are fleeing on foot in blizzard conditions with so many others. Soon, Opa and Oma decide they need to rest and will catch up with the family later. Opa tells them to head for the Vistula Lagoon and to try to get on a ship to Denmark.  Mama and the children get separated trying to cross the frozen lagoon on a sled, but by the time Liesl, Otto, and Mia make it to the other side, Mama has disappeared from the ice.

Liesl had already promised Mama that no matter what, she would take care of the brother and sister. While staying in an abandoned house, they are discovered by some Russian soldiers. Luckily, one is a kind man and he takes them to a Russian army camp where they are treated with some kindness, but when Liesl realizes that the Captain has designs on taking Mia away from her and sending the baby to his wife in Russia, she knows it is time to take her siblings and run away. And the only place to run to is the forest. There, they discover they are not alone when they meet other homeless children trying to survive on their own in the woods and stay out of Russian hands.

Life in the woods isn't easy, continually foraging for food and some measure of shelter. But long the way, they also meet Karl, who helps them learn the ropes, even if it sometimes means learning how to steal what they need to survive. Learning that there is food in Lithuania, Liesl and Karl decide they should try to get there and plan on jumping into a train as it moves out of the station. Karl and Otto make it, but Liesl, holding Mia, doesn't. Thinking she's lost Otto, Liesl is surprised when he comes running back, having jumped off the train. When they finally do make it to Lithuania, Mia is quite sick and Liesl isn't sure she will survive. But, they are taken in by a couple, Magdalena and Dovydas, who help nurse Mia back to health. And while their situation is comfortable and safe, Liesl wonders if they will ever be reunited with their family again.

Nannestad's book highlights a phenomena that occurred toward the end of WWII when East Prussian children were separated from their parents for one reason or another as the Russian army advanced and took to living in the forests to survive. These homeless children became known as Wolfskinder or wolf children. Some were adopted by Lithuanians, despite harsh punishment by the Russians if they were found helping Germans, even if the Germans were only children.

I thought We are Wolves did a great job at depicting the harsh conditions and difficulties the Wolf children faced from the moment their family decided to flee until they were finally taken in by kind Lithuanians. I liked the way Nannestad explored themes of family, courage, resilience, and identity (especially important given that the Wolf children had to have their names changed in Lithuania for safety's sake). I also like the way the name Wolf was capitalized on throughout the novel as Liesl kept reminding herself and her siblings that they were Wolfs, and each section was captioned using the word wolves, for example: Proud Wolves, Wild Wolves Vanishing Wolves.

The Wolfskinder may be a little known aspect of WWII, but given what is happening right now in the Ukraine, I believe We are Wolves will definitely resonate with today's readers, who are seeing for themselves what the ravages of war does to families. I highly recommend this book.

This book was purchased for my personal library.