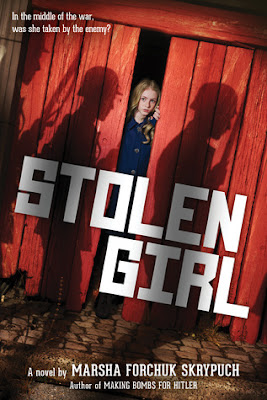 **This review contains a spoiler at the end**

Ever since the war had ended, Ukrainian born Nadia Kravchuck and her adoptive mother Marusia have been living in a displaced persons camp in Europe. But now it's 1950 and 12-year-old Nadia has just arrived in Canada with her mother Marusia to join her  adoptive father Ivan, already living in Brantford, Ontario. On her first night in her new home, several people come to visit and Nadia is introduced to Mychailo, a fellow Ukrainian immigrant with whom she will be attending school and receiving English lessons at a neighbor's house.

Unfortunately, Nadia is also plagued with nightmares and flashbacks, none of which make sense to her at first, although she feels that they have something to do with her past, a past she doesn't remember. She knows that although Ivan and Marusia aren't her real parents that they love her as if she were their own child. But who is she really? When Mychailo tells her that she doesn't sound Ukrainian and that she looks like a Nazi to him, Nadia worries that maybe that's who she really is. But Mychailo also seems like her, taking her to the library,  and reminding her to call Ivan and Marusia mother and father, or the Canadian authorities will take her away.

Disturbed by that she might indeed be a Nazi, the nightmares and flashbacks increase, often triggered by what seem to be totally unrelated things, and finally Nadia remembers that her name used to be Gretchen Himmel and that she was a member of a Nazi family.

Later, on the first day of school, Marusia presents Nadia with a new ethnic-looking outfit that she had handmade her, despite working long, hard hours on her farm job. At school, the teacher is kind, but when a boy says she looks like a Nazi, she runs away in humiliation. Luckily, another new girl named Linda sits next to Nadia in class and the two become best friends.

Nadia eventually begins to adjust to her new life, but continues to be plagued by flashbacks to her past, causing her a great deal of confusion. Little by little, however, the puzzle pieces begin to fit together and form a picture of her life as Gretchen Himmel, daughter of a high ranking Nazi official, his cold, distance wife and his other daughter Eva. But the dreams and flashbacks continue, leading Nadia to believe that Gretchen Himmel is not her real identity. And gradually, more puzzle pieces fit together, finally falling into place through the most innocuous of triggers - a piece of candy.

Stolen Girl is one of the most emotionally draining books I've read, and knowing before hand who Nadia really is didn't lessen the tension one bit. The novel centers around Nadia's Post Traumatic Stress Disorder or PTSD and the way it manifests in her after her traumatic wartime experiences. It has to one of the hardest conditions to successfully write about in a young person for young readers to really understand, but Skrypuch has managed to do just that in the ways Nadia's past reveals itself to her through her dreams and flashbacks.

**Spoiler Alert**
Stolen Girl is also one of the most compelling books I've read about the Lebornsborn Program. With her blond hair, blue eyes and young age, Nadia was a perfect Aryan-looking fit for this Nazi program designed to strengthen the Hitler's master race. Children like her were kidnapped, sent to Germany to be Germanized and than adopted by a Nazi family. Interestingly, other children who did not fit the Aryan picture were sent to labor camps, and Skrypuch gives hints about who Nadia/Gretchen really is when she sees a girl in an German labor camp of Ostarbeiters (workers from Eastern Europe) who looks just like her, and is in return noticed by the same girl.

If you read Making Bombs for Hitler, you already know some of Nadia"s story and why she was recognized by the young Ostarbeiter. You may recall from that book that in 1943, after the Nazis shot their mother and the Jews she had been hiding, Lida, 8, and her younger sister Larissa, 5, were kidnapped from their grandmother's home in the Ukraine and sent by cattle car to Germany, along with all the other Ukrainian children the Nazis took. Days later, arriving at a slave labor camp in Germany, Lida and Larissa were forcibly separated from one another, and from that point the story follows only Lida's life in the labor camp. If you haven't already read Making Bombs for Hitler, and the other companion book, The War Below), I highly recommend it. Stolen Girl, the companion to Lida's story, is the story of what happened to Larissa after being taken from her sister.

Stolen Girl is gripping novel that demonstrates how the trauma of war lives on long after the war has ended. It's a suspenseful, visceral journey that proves once again Skrypuch's talent for bringing difficult stories to life. 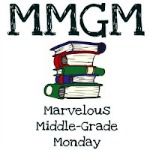 Be sure to check out the other Marvelous Middle Grade Monday offerings, now being carried on by Greg at Always in the Middle.
Posted by Alex at 11:56 AM