The FitzOsbornes in Exile by Michelle Cooper 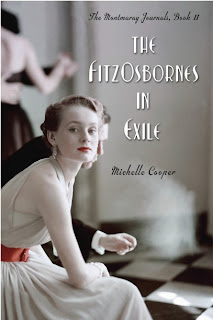 At the end of The Brief History of Montmaray, the first book in the (thus far) trilogy about the FitzOsbornes, royal family of the Kingdom of Montmaray, they were running for their lives in the midst of a Luftwaffe attack.  Book 2, The FitzOsbornes in Exile, continues following these royals after their safe arrival in London as recorded by Sophia FitzOsborne in her journal.


Now, it is 1937 and the FitzOsbornes have found refuge at Aunt Charlotte’s Milford Park estate in Dorset.  Sophie has been looking forward to making her debut in society, excited more by the elaborate parties and the beautiful gowns. Veronica, her beautiful cousin, couldn’t care less about making her debut and instead is focused on getting Montmaray away from the Germans, Henry, short for Henrietta and Sophie’s younger sister, is up to her usual tricks, even managing to acquire a pet pig named Estella. Toby, the future king of Montmaray, is more interested in Simon Chester than school or his monarchy, and Simon, son of housekeeper Rebecca Chester and the late King of Montmaray, has just been made Lord Chancellor in an attempt to appease his claim on the Montmaravian throne.
Needless to say, this all makes for some interesting reading.  Oh yes, and wealthy Aunt Charlotte rules over the FitzOsbornes with an iron hand, doing her best to get Sophie, Toby, and Veronica married off to suitable partners, and away from ideas of returning to Montmaray, and getting Henry under control and more girlish.


Sophie continues to journal about the everyday things in the lives of the FitzOsbornes, providing a window into 1930s English upper class society and politics.  And Sophie is the ideal chronicler of all that goes on around her.  She is shy and quiet around people, becoming the girl no one notices, but also the girl who takes in everything she observes and uses it for, as Simon Chester learns, rather Machiavellian purposes.


Of course, with the world on the brink of war, politics is everywhere in The FitzOsbornes in Exile. with lots of mentions of real-life characters like Unity Mitford, the Mitford sister who likes wearing her Swastika badge everywhere, British Fascist Sir Oswald Mosley and his Blackshirts, and Kathleen “Kick” Kennedy, Sophie’s new friend and daughter of Ambassador Joseph Kennedy.  And if these are unfamiliar names, don’t worry.  Cooper makes it all very clear and intelligible for readers who might not be so familiar with this time period.  And you would think that the assassination attempt on Veronica for her strong anti-Fascist opinions, a target of the Fascist movement in Britain, but, well, I’ll leave the crazed assassination bit for you to discover yourself.


Of course, there is also plenty of humor.  My favorite bit being when Henry and her Girl Guide patrol of evacuated Basque girls are invited to Buckingham Palace for tea, along with several other Guide patrols.  Things quickly go downhill for Henry when she graphically explains to Princess Elizabeth how the Germans could annihilate London should war be declared, much to the horror of many of the Guides present and Queen of England herself.  After all, England was maintaining a policy of appeasement and the delusion that they were still friends with Germany.  In fact, England’s early refusal to take Germany seriously is demonstrated throughout The FitzOsbornes in Exile.


All in all, The FitzOsbornes in Exile a very worthy sequel to The Brief History of Montmaray, though somewhat more of a historical novel than the first book.  It is still witty and fun, and there is plenty of action and adventure to satisfy.  The book covers pre-war Britain, beginning in January 1937 and continuing through August 1939, less than two weeks before war is declared.  But, do not be despaired wondering if the FitzOsbornes will ever get their island kingdom back - there is a third book, aptly names The FitzOsbornes at War.  It is being released in Australia and New Zealand in April 2012, lucky ducks, and in England and North America in October 2012.  Umm..I wonder how much the postage from Australia to the US is?  Tempting!


For more information on the FitzOsbornes books, including the forthcoming The FitzOsbornes at War (you can read an excerpt there) please visit Michelle Cooper’s website.
The FitzOsbornes in Exile received the following well deserved honors:


Listed in the 2012 Best Fiction for Young Adults by YALSA, a division of the American Library Association.
Named in the 2012 Rainbow Books list of 'quality books with significant and authentic GLBTQ content', compiled each year by the American Library Association.
Named one of the Best Teen Books of 2011 by Kirkus Reviews.
Shortlisted for the 2011 Ethel Turner Prize for Young People's Literature (NSW Premier's Literary Awards)
Longlisted for the 2011 Gold Inky Teenage Choice Award
Notable Book for Older Readers in the 2011 Children's Book Council of Australia awards
Shortlisted for the 2010 Western Australian Premier's Young Adult Book Award
Posted by Alex Baugh at 8:10 AM