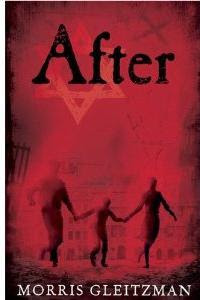 After the Nazis took my parents I was scared
After they killed my best friend I was angry
After they ruined my thirteenth birthday I was determined
To get to the forest
To join forces with Gabriek and Yuli
To be a family
To defeat the Nazis after all.

After I finished reading Once, the first story about Felix, 10, a young Jewish boy on the run from the Nazis, I wanted to know more about this brave boy and Zelda, the six year old who became his friend.  And so, Morris Gleitzman gave us Then, which did indeed continue the story of Felix and Zelda.  When I finished reading that second book, I still wanted to know more and so along came book three, called Now.  But this is the story of 80 year old Felix and his granddaughter Zelda, 10.  But wait, Now ended in the middle of the war.  What happened to Felix in the last two years of the war?  Where and how did Felix spend them?  Well, we know that he spent time helping partisans with his friend Gabriek.  But, how the heck did that come about?

Well, now there is After.  After returns to the war, where it is 1945 and Felix has been hiding for two years in a hidey hole in Gabriek's barn, emerging once a night to eat and excercise.  The hidey hole is right under the hooves of Gabriek's horse Dom.  On the night of his 13th birthday, Felix hears Gabriek talking to some men with guns.  Nazis?  But they are speaking Polish and are not wearing uniforms and there is a lady wearing a red scarf with them.  Confused and scared, Felix decides to follow them when they head off to the forest with Gabriek.  Afraid they are going to kill Gabriek, Felix tries to rescue him by yelling at his captors.  With their guns pointed and ready to shoot, Felix gives himself up to save Gabriek - only they aren't Nazis, they're partisans and Gabriek is one of them and they have just sabotaged a Nazi train.

When it is all over, Felix is allowed to go home with Gabriek, but when they get there, the farm is on fire, set by the Nazis.  They manage to save the horse and find their way to the partisan camp, asking to permanently join.  But Felix is an outsider and must prove himself - by stealing a gun from a Nazi.  The lady in the red scarf, Yuli, takes him to a village and tells him what to do.

Felix ends up joining the partisans, but as the doctor's assistant not as a fighter.  He befriends the maternal Yuli, even fantasizes that Gabriek and Yuli could be his new parents.  But the war is still going on, and the more the Nazis are defeated, the more hateful and destructive they become.  Life is still precarious - for Felix and for the partisans.

There is much more in store for Felix and Gabriek before the end of the war, but it would probably require a **Spoiler Alert** and I think it needs to be experienced first hand.  Suffice it to say, that After did, indeed, give me the sense of closure that I really needed on Felix's story.

Gleitzman, we know, is a master storyteller and the four books that comprise Felix's history are no exception.  Caught in one of the darkest periods, witness to all kinds of horrors, he gives us a Felix who has managed to maintain his sense of humanity, fairness and imagination throughout and it is all incredibly believable.  And in After, we see the man that Felix will become - a doctor who wants to heal the wounds of the world - small wonder.

After is a true coming of age book.  Had things been different, Felix would have had a bar mitzvah at 13 instead of joining a partisan group.  But even so, there is a very discernible change in Felix in this book.  He is not a young boy anymore, praying to Richmal Crompton, but has a sense of maturity about him that becomes all the more obvious and poignant when he is put into a paternal position of taking care of three Jewish sisters hiding from the Nazis.

I am sorry to say good-bye to Felix now, but am comforted by the fact that I can reread his story anytime I want to.  His story is sad, funny, violent and painful, but so well worth reading.

Patience has never been my strong suit, so as soon as I knew it was available in Australia, NZ, and the UK,  I also knew I had to order After from The Book Depository (free shipping, Americans!) because I don't know when the American edition is going to come out.  Sound good?  Why wait? You can read the first chapter right here on The Morris Gleitzman Collection.

And thank you, Mr. Gleitzman, for doing such a bang up job telling us Felix's story.