Re-reading Blackout and All Clear by Connie Willis 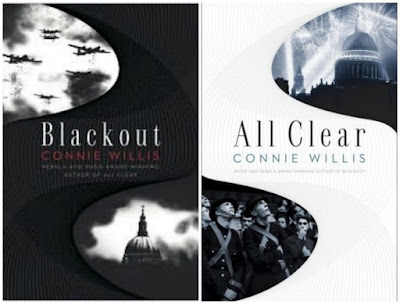 I decided to re-read Blackout and All Clear not long ago. I read them back in 2010, and while I don't usually re-read books, I did these because I always felt that I had read them too quickly. And the fact is I loved them as much the second time around as I did the first. Then I re-read my review and decided, 9 years after I wrote it, to repost it. This is what I wrote on November 17, 2010:

"I have just finished reading Blackout and All Clear and find myself wishing that Connie Willis could have kept going. After reading these two books totaling 1,168 pages, I find I have become quite attached to the characters and had a hard time saying goodbye when I came to the end. They are just that good!


The books are based on a simple enough premise. In 2060 Oxford, history is studied by traveling back in time to observe, collect data and interpret events firsthand under the tutelage of Mr. Dunworthy, the history professor in charge of time travel. The story centers on three students interested in different aspects of World War II. Michael Davies, disguised as Mike Davis who wants to go to Dover as an American war correspondent to observe the heroism of the ordinary people who rescued British soldiers from Dunkirk; Merope Ward becomes Eileen O’Reilly, working as a servant to Lady Caroline Denewell in her manor at Backbury, Warwickshire in order to observe evacuees from London; and Polly Churchill becomes Polly Sebastian, a shop girl by day working in the fictitious department store Townsend Brothers on Oxford Street, who wants to observe how Londoners coped during the Blitz.

In Blackout and All Clear, Willis makes it clear that there are certain cardinal rules of time travel. First, the traveler may not do anything to alter a past event. But that was supposed to have been taken care of so that it couldn’t happen. In addition, an historian is not allowed to travel to a divergence point, a critical point in history that can be changed by the presence of the historian. Nor can a predetermined drop site open if there is a “contemp” nearby who might see what is going on. Furthermore, once they have arrived at their destination, the historian is required to return to 2060 Oxford and report in. If they don’t do this, a retrieval team is sent to bring them back to Oxford. One other thing, time traveling historians are not supposed to have contact with each other while in the past.

That being said, Mike ends up in Dunkirk, saving a life and Eileen is prevented from returning to Oxford at the end of her stay by an outbreak of measles among the evacuees. Both ultimately travel to London, seeking Polly, hoping to use her drop to get back to 2060, but Polly’s drop has been compromised by a bomb and has stopped working. These extended stays do not result in the arrival of retrieval teams; but in much more complex adventures and worries. Have they altered the future unintentionally? Or unalterably? And if so, what does that mean for the future? And will the historians ever get back to 2060 Oxford?

In addition to Mike, Polly and Eileen, Willis has drawn some interesting supporting characters in Blackout and All Clear, all very different from each other and all of whom I found myself caring about. There is Sir Godfrey Kingsman, the well known actor who is part of the entourage in Polly’s bomb shelter, though he did get on my nerves with his constant quoting of Shakespeare, yet he was still endearing. He always referred to Polly as Viola from Twelfth Night because of the way she arrived at his bomb shelter her first night, and she was going by the last name Sebastian, the name of Viola’s twin brother, something to keep in mind as you read. And Colin Templer, 17 and besotted with love for Polly and who had promised to rescue her if anything went wrong. Colin wants to go to the Crusades so he can use the paradox of time travel to close the four year age difference between himself and Polly. Eileen’s life was plagued by Alf and Binnie Hodbin, brother and sister urchins evacuated from London to Backbury, pranksters and troublemakers extraordinaire. Mike had Commander Harold, elderly captain of the Lady Jane who unofficially went across the English Channel to participate in the evacuation of soldiers from Dunkirk and changed the course of Mike’s time travel.

Connie Willis has done a brilliant job writing Blackout and All Clear, even though I know I will probably have to reread both books again to really appreciate them [yes, that's exactly what happened]. When I first read Blackout, I didn’t pay close attention to the dates at the beginning of each chapter, so sometimes they were a little confusing. I found myself preoccupied with questions about why I was suddenly in 1944 or 1945 and who were Mary Kent and Ernest Worthing and how did this connect to Mike, Polly and Eileen?  Blackout sets up all the questions and All Clear answers them.

Throughout both novels, the three main characters are confused by what has happened to them, and the chaos of the period, such as not knowing when or where bombs may fall, adding to their sense of helplessness once Polly's knowledge of when and where bombs will fall is exhausted. As in the real war, anger, anxiety, confusion, fear, frustration and helplessness are exactly the array of emotions that the reader experiences along with Mike, Eileen and Polly. Yet, all is not doom and gloom. Willis balances these with instances of hope, courage, selflessness and heroism. She also injects some very comical scenes into the story, such as an angry bull and the deployment of rubber tanks in a muddy, foggy pasture to fool the Luftwaffe, or the constant antics of the Hodbins. And of course, there is the dry wit of the British and their ‘carry on’ attitude after a blitz attack. I really like the fact that Willis keeps the story focused on the plight of the stranded historians, rather than jarring the reader by going back and forth between them and Oxford 2060.

Blackout and All Clear are both chock full of action, information, comedy, tragedy and everything else that goes into making a great story. They are not really meant for YA readers, yet they are perfectly suitable for high school kids, and even some younger ones. So without reservation, I would definitely recommend Blackout and All Clear to readers in their teens and to everyone else. It is a wonderful a tale about survival and heroism."

These books are recommended for readers age 13+
These books were purchased for my personal library.

Willis described the blitz and the bombs that hit Oxford Street, where Polly worked, in amazingly realistic detail.  Check out the following for an online exhibition of the West End at War including photos and maps of the blitz in that area, the same area that plays a large part in Blackout and All Clear
http://www.westendatwar.org.uk/index.aspx
﻿﻿﻿﻿
The following has online information about the Docklands and East End during the war, another area highlighted by Connie Willis;
http://www.museumindocklands.org.uk/English/EventsExhibitions/Themes/DocklandsWar/