The Light in Hidden Places by Sharon Cameron 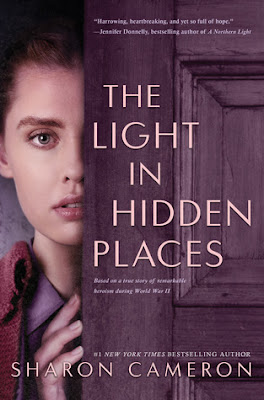 I usually think of Sharon Cameron as a writer of science fiction not historical fiction, but she has really outdone herself with The Light in Hidden Places. It is a fictional account of the life of Stefania "Fusia" Podgorska and her yonger sister Helena who were ultimately named as Righteous Among Nations by Yad Vashem for hiding and saving the lives of 13 Jews during the Holocaust.

At age 12, Fusia decides to leave her family's farm to live with the Diamants, a Jewish family that runs a grocery store in Przemsyl, Poland. Welcomed into the family, Fusia lives there for 3 happy years, during which a secret attraction developes between Catholic Fusia and Jewish Izio Diamant. But in September 1939, Poland is attacked and invaded by the Nazis and life changes for everyone.

In April 1942, the Diamants are forced to move into the Przemsyl ghetto. Fusia is tasked with helping them survive by bringing what she could sneak in by squeezing through the fence. But then she learns that the Nazis have killed Izio, Grieving, Fusia decides to go back to the family farm. There she finds everyone gone, except her 6-year-old sister Helena, whom she brings back to Przemsyl with her.

One night, in November 1942, Max Diamant shows up at Fusia's door and asks to stay the night. His parents and some of his siblings had already been rounded up in a Aktion, and sent to their deaths and he and his brother have escaped the ghetto. When they decide to stay with Fusia and Helena, Fusia realizes she needs a larger place for hiding them. She finds a small cottage and before she knows it, Fusia is hiding 13 Jews in it. Then, the Nazis build a hospital across the street and move three nurses into the cottage, as well. Fusia begins to panic, but the nurse only stay seven months.

Fusia's story held me spellbound from start to finish. I kept thinking what a brave young woman she was to take the kinds of risks she continually chose to take for the family that had shown her so much more love and kindness than her own family had, spending her pay to by food for everyone, and risking death if caught. The novel reads like a taut drama, filled with tense moments and events throughout. Then I remember much of what I'm reading really happened.

Cameron's research for this story is impeccable. Through interviews, research trips to Poland and Stefania's own unpublished memoir, Cameron has woven together a coherent, reality-based Holocaust narrative. She includes extensive back matter, including photos and information about what happened to the Jews Fusia hid after the war ended and they were liberated.

This book was gratefully received from Edelweiss+