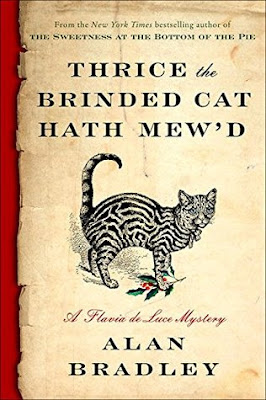 Yes, it's that time of the year again, time to review the newest Flavia de Luce mystery.  The Christmas season has rolled around once more but it looks to be a dismal one for Flavia, now 12.  After being expelled from her mother's alma mater, Miss Bodycote's Female Academy in Canada, in less than a term, Flavia returns to the family's rather run-down estate, Buckshaw, in Bishop's Lacey. Expecting to be welcomed back with open arms at the train station by her father and sisters Feely and Daffy and young cousin Undine, Flavia is surprised to find only their beloved family retainer Dogger there bearing bad news.  Colonel Haviland de Luce, Flavia's father, has been diagnosed with pneumonia and is in hospital quite ill.

When Flavia realizes that nothing else at home has changed, she takes off on Gladys, her trusty bike, and despite the freezing rain, decides to visit the vicar's wife, Cynthia Richardson.  After some tea and catching up, Cynthia asks Flavia if she would bike the 2 1/2 miles over to Thornfield Chase to deliver an envelope to a Mr. Roger Sambridge, master wood-carver.

But when she gets to Thornfield Chase, Flavia discovers a dead Mr. Sambridge hanging upside-down on the back of his bedroom door from an elaborate leather and wood contraption looking like he had been crucified.  Naturally, Flavia does her own investigations of the scene before the police and Lieutenant Hewitt arrive.  And one of the things she notices is a set of pristine first edition children's books written by Oliver Inchbald, one containing the name of an acquaintance of Flavia's - Carla Sherrinford-Cameron.  Why, she wonders, would a 70-year-old woodcarver have these children's books?  He had no wife or children.

The investigation of Roger Sambridge's murder leads Flavia on quite a journey.  In London, she seeks help from Mildred Bannerman, whom she met at Miss Bodycote's, and who was once accused than acquitted of murder, and who seems to know everyone.  When she learns that Oliver Inchbald died on a small island, pecked to death by seagulls, Flavia is led to a women who claims to be a witch.  And then to an odd Boy Scout who took pictures of Inchbald on the island before the authorities shows up.

Oddly enough, it was Carla Sherrinford-Cameron's Auntie Louise Congreve who ultimately identified Inchbald's body or really what was left of it after the seagulls were done.  But how is Auntie Loo connected to Sambridge? And Inchbald?  Sadly, Auntie Loo had died in a diving accident shortly after Inchbald was discovered dead.

As Flavia begins to tie up the loose ends and seemingly disconnections related to the murder of Rober Sambridge, she also begins to notice that she herself is changing.  After all, she is close to being a teenager now, no longer a child.  Will adolescence change our beloved Flavia?  I hope only for the better.

I enjoyed reading this 8th Flavia de Luce mystery as much as I have the 7 previous novels, but I did notice a certain pall hanging over this novel, most likely caused by Colonel de Luce's illness.  Flavia seems a little less spontaneous and her usual sense of humor isn't a prevalent as before, a combination of growing up and her father's illness?  Probably.  And there was none of Flavia's trademark chemical experiments to help her solve the case, but there was a nice unusually cooked breakfast made in her lab that sounded delicious.

Still, Bradley's writing is still excellent as well as his plotting.  Despite Flavia's foray to Canada, none of the setting, Buckshaw and Bishops' Lacey, has been lost and I had the sense that I had come home along with Flavia.

Fans of Shakespeare's Macbeth will recognize the title from Act 4, Scene 1 and the incantations of the three witches that begins with the first witch chanting "Thrice the brinded cat hath mew'd." And yes, one of the things that helps Flavia put the case together is a brinded (tortoiseshell) cat who does "meow" three not so easy to find times.

And fans of Flavia will probably enjoy this latest edition as I did, and those who haven't discovered these mysteries won't have trouble reading Thrice the Brinded Cat Hath Mew'd, as with all of the Flavia books, it works as a stand alone novel.  But be warned - they are addicting.

Shucks, now I can't wait for the next book to come out.

This book is recommended for readers age 12+
This book was an EARC received from NetGalley
Posted by Alex at 8:44 AM