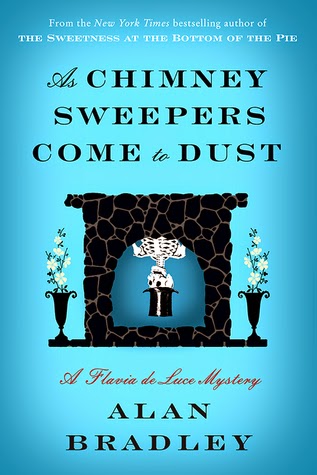 I knew I was probably pushing the WWII connection with the 7th Flavia de Luce mystery, but, well, I read it and loved it anyway.  And after all, #6, The Dead in their Vaulted Arches, did leave us with a cliffhanger - with Flavia, now 12, banished to Canada and boarding school.  How could I resist?

It is 1951, and very much against her will, Flavia sets sail from her beloved Buckshaw and Bishop's Lacy to Canada in the company of the rather disagreeable Dr. Ryerson Rainsmith, Chairman of the Board of Guardians at Miss Bodycote's Female Academy and his equally disagreeable second wife, Dorsey (hmm. what happened to wife number 1?, Flavia wonders)

But finally, after a long, rough voyage followed by a long train ride, Flavia arrives late one night at Miss Bodycote's in Toronto.  Taken to her room and glad to be out of the Rainsmith's clutches, Flavia no sooner falls asleep when she is pummeled awake by a girl calling her a dirty, rotten traitor.  Determining that it is a case of mistaken identity, her attacker, Patricia Anne Collingwood, tells Flavia that she has noticed three girls in the school have gone missing and she was trying to get to the bottom of it all.

But when the headmistress, Miss Fawlthorne, shows up, Collingwood scurries up the chimney to hide, leaving Flavia to deal with explaining so much noise.  But just as Flavia convinces the headmistress that she was just disoriented and talking to herself, Collingwood crashes out of the chimney, followed by a charred body wrapped in a Union Jack, and with a detached head.  But who does the body belong to? And why was it stuffed up the chimney and for how long?  Could it be one of the three missing girls?  How will Flavia possibly solve this case without the cooperation of her great friend from Bishop Lacy Inspector Hewitt?  After all, Toronto's Inspector Greenhurst doesn't know her, doesn't know her reputation, and things are done differently in Canada, so no help there for Flavia.

Now, you knew that even though Flavia is away from her friends, family and chemistry lab at Buckshaw that murder and mayhem would follow her across the ocean.  Still, I didn't really know what to expect when Bradley decided to take Flavia out of her comfort zone and drop her half way across the world - in a boarding school, no less.  But I was definitely not disappointed with what I read.

Each book gives a little more information about Flavia and her mother.  Miss Bodycote's is the school her mother attended, and it seems that Flavia is destined to follow in her footsteps.  But even though we've learned a lot about Harriet de Luce, she is still something of an enigma to both the reader and to Flavia.  And the mysterious Miss Bodycote's is part of the mystery of Harriet de Luce.  All I can say is that nothing is as it seems in this 7th mystery.

Flavia, thankfully, hasn't changed a bit - she's still too smart, too feisty, too incorrigible in the best of ways.  Is the purpose of Miss Bodycote's to test Flavia's mettle, dropped into a difficult situation, away from things loved and familiar?  To initiate her into Nide and the enjoyment of pheasant sandwiches (don't remember what these mean?  Go back and reread the end of The Dead in their Vaulted Arches).

One word of caution.  Normally, each book gives you enough information about Flavia's past adventures in mystery-solving, but I'm sorry to say that this volume just doesn't stand alone.  Don't get me wrong, it's wonderful fun, but you need a little more background.

It is my understanding there there will be three more Flavia de Luce mysteries still to come and perhaps by the end of book 10, all will be revealed about her life.

If you love mystery series, this is one of the best.

This book is recommended for readers age 14+
This book was an EARC received from NetGalley
Posted by Alex at 12:34 PM