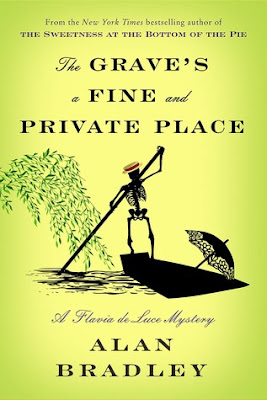 This is the 9th Flavia de Luce mystery and the 6th book I've reviewed here. Of course, I do know it is now June 1952, Flavia has turned 12, and that aside from the odd mentions, WWII no longer plays much of a part in the stories.

As I said, it is June 1952, and six months have gone by since Haviland de Luce, father of Flavia and her sisters Feely (Ophelia) and Daffy (Daphne), passed away after an illness. Though the family estate, Buckshaw, was left to Flavia, her Aunt Felicity, bully and tyrant, arrives from London and decides it is to be sold and Flavia will go to London to live with her. Given six months to mourn, Flavia, Feely, and Daffy, are on a trip planned by faithful retainer Dogger, where, after punting along a river, they land in the village of Volesthorpe, near the notorious St.-Mildred's-in-the-Marsh church. It was here that Canon Whitbread allegedly poisoned three ladies in his congregation with the communion chalice, for which he was hanged. Yes, Dogger certainly does know his Flavia, poisons are her thing.

But when Flavia fishes out the Canon's son Orlando from the river by the church, new questions arise. Flavia cleverly manages to get some stomach fluid from the corpse for later analysis before the arrival of Constable Otter. As clever as he is unfriendly, Constable Otter quickly lets her know that her help is absolutely unwanted, an attitude that causes Flavia's suspicious nature to be on guard.

Away from her own well equipped chemistry lab at Buckshaw, Flavia and Dogger find they must improvise in order to carry out the investigation into Orlando's death. Luckily, Dogger, who seems to have an abundance of all kinds of knowledge, also turns out to be a genius at using whatever is at hand. I loved how Dogger made an improvised microscope (pg 85), especially clever and amusing after Otter condescendingly manplained to Flavia what a microscope is (pg 45). Still, Flavia is disappointed that Orlando wasn't poisoned, but she has become more and more aware that there are, nevertheless, sinister things under foot in Volesthorpe, and she is determined to get to the bottom of them all. And, as it turns out, there is plenty to get to the bottom of.

When I first began reading The Grave's a Fine and Private Place, I was feeling a little disappointed. It definitely has a slightly different feel to it than the previous 8 books. But as I got further into the story, I began to enjoy it as much as the other Flavia books, but it never lost the feeling of difference. I've thought about it and this is what I think:

The Grave's a Fine and Private Place is the next to the last Flavia de Luce mystery and, at 12, Flavia is entering adolescence. No longer a child, she is maturing and it shows - kudos to Bradley for portraying the subtle ways in which this happens. I realized it had actually began in book 8, Thrice the Brinded Cat Hath Mew'd after Flavia returned to Buckshaw from boarding school in Canada. Most notable is the way she now sees Dogger as more of an person in his own right and an equal and less as a servant, and there are changes in her relationship with her sisters, particularly Daffy, whose literary passions turn out to be pretty useful for solving murders. Don't get me wrong, Flavia is still as enthusiastic about solving murders, performing chemical experiments and learning about poisons as ever she was, but now her life is expanding.

Being away from the confines of Buckshaw and Bishop's Lacy also allows Bradley to bring in more varied but no less eccentric characters. There is Orlando Whitbread's mentor Poppy Mandrill, former actress now confined to a wheelchair; Arven Palmer, the landlord of the Oak and Pheasant and his wife, Greta Palmer; three roustabouts from the traveling Shadrach's Circus and Menagerie as well as the proprietor, Mrs. "Dreadnought" Dandyman; the village's undertaker F. T. Nightingale, whose son Hob befriends Flavia; and last but not least, Dogger's old friend (?) Claire Tetlock - each with their own secrets to be uncovered.

Like most of Bradley's plots, this one will require you to suspend your disbelief, not because he has delved into fantasy, just into things improbable, exciting but improbable. But is wouldn't be a Flavia de Luce mystery if the improbable were left out, would it?- then it would just be a book about a girl who likes chemistry. If you love a little off the wall, somewhat noir mystery with unconventional characters, this is the book/series for you.

This book is recommended for readers age 13+
This book was an EARC received from NetGalley
Posted by Alex at 12:01 PM 1 comment: 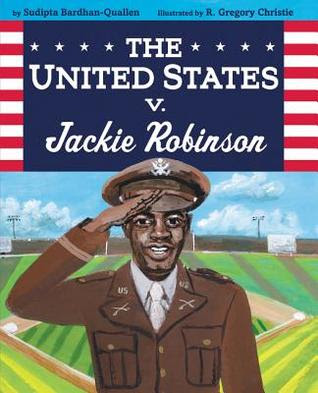 When most of us think about Jackie Robinson, it's in the context of his breaking the color barrier by becoming the first African American man to play major league baseball, joining the Brooklyn Dodgers in 1947. Jackie was a great baseball player, and I have that on authority of everyone I knew growing up in Brooklyn who remembered the day the Dodgers won the 1955 World Series. They say there literally was dancing in the streets that day. But baseball wasn't the first time Jackie challenged segregation's accepted status quo.

In The United States v. Jackie Robinson, Sudipta Bardhan-Quallen looks past his life as a Dodger, and focuses on his early experiences growing up in segregated Pasadena, California and, later, his life in the United States Army.

As a boy in Pasadena, Jackie's mother Mallie had taught her children to stand up for what was right, even if that was difficult to do. Mallie lived by example, refusing to be bullied out of the white neighborhood the Robinson had moved into. Jackie loved sports and was a great athlete in school, and as his parents had hoped, he was recruited to play for UCLA. And although he was a one of the country's most successful college athletes, people still saw him as a black man, including his teammates and coach. Discouraged that only white players could become professional athletes, Jackie left college and joined the army when the United States entered WWII.

And it was in the army that Jackie faced his greatest challenge. It turned out that the army was no different for Jackie than Pasadena and college had been. When he joined up, the army was still segregated, and Jackie was forced to deal with discrimination every day. When he tried to join the baseball team, he was told in no uncertain terms that he could only play on the 'colored team' which simply did not exist.

Then, in 1944, the army was ordered to end segregation on all military posts and buses. So, when Jackie sat in the middle of an army bus and refused to move to the back when the white driver demanded that he do so, it was Jackie who was arrested and who faced a court-martial. Like his mother, Jackie stood up for what was right, and after five hours of testimony by different people, he received a not-guilty verdict.

Bardhan-Quallen presents Jackie Robinson's early life clearly and concisely, making it fully accessible in this picture book for older readers. She has not only captured Jackie's learned sense of justice and fair play, but also the fact that changing laws doesn't change people's learned prejudices, as readers will see in the book. And while this may be a work of historical nonfiction, the message in it will resonate in today's world. Nevertheless, kids will certainly discover a hero in Jackie Robinson, a courageous man who lived life with quiet dignity and integrity coupled with a firm belief in standing up for what is right.

Bardhan-Quallen has included a timeline of both Jackie's life and events that impacted it. She also has an important Author's Note for understanding what the times were like during Jackie's life, and a Bibliography for further exploration.

This book is recommended for readers age 7+
This book was purchased for my personal library
Posted by Alex at 10:08 AM 3 comments: