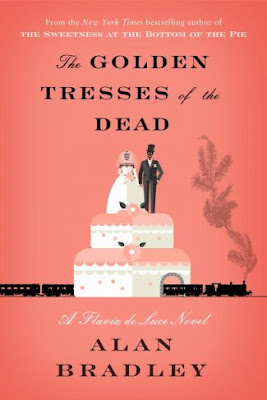 It's autumn 1952, and although Flavia de Luce and her sisters, Feely (Ophelia) and Daffy (Daphne) are still distraught over the loss of their father less than a year ago, the Buckshaw household is getting ready for Feely's marriage to Dieter. Dieter, you may remember, was a former prisoner of war, a German pilot shot down over England by RAF pilot Reggie Mould. Now, Reggie is Dieter's best man at his nuptials.

All goes well at the wedding until Feely makes the first cut of her wedding cake, and discovers a severed human finger where the slice used to be. Feely's subsequent hysterics naturally gives Flavia a chance to wrap the finger in a napkin and whisk it away to her laboratory upstairs, where she is soon joined by Dogger, who had previously been her father's valet and loyal family's servant. You may recall that at the end of Book #9, The Grave's a Fine and Private Place, Flavia and Dogger had gone professional, establishing Arthur W. Dogger & Associates, Discreet Investigations. Needless to say, they immediately begin investigating the finger and lose no time in identifying it as belonging to a famous guitarist, Mme. Adriana Castelnuovo.

Before they get too far with the mystery of how Mme. Castelnuovo's severed finger ended up in Feely's wedding cake, they are hired by a Mrs. Anastasia Prill. Mrs. Prill believes that several letters of a delicate nature have been stolen from her home. Her father, Dr. Augustus Brocken had been a homeopathic practitioner and the developer of Brocken's Balsamic Electuary, a miracle cure all balm, which made him oodles of money. Now, though, the elderly Dr. Brocken has been living in an unresponsive state in Gollingford Abbey, a very expensive private hospital. But no sooner do they begin piecing together the clues to the missing letters then Mrs. Prill is found dead in her home, a suspicious cup of coffee nearby.

In the middle of all this, Flavia's friend and wife of the vicar, Cynthia Richardson, asks if two missionaries from Africa, Miss Doris Pursemaker and Miss Ardella Stonebrook, can stay at Buckshaw for a while, a request to which Flavia grudging agrees. It doesn't take long for Flavia and Dogger to wonder if the severed finger, the Brocken family's intrigues and the two missionaries are somehow connected to each other.

Flavia, who has been acutely feeling Feely's departure from Buckshaw, "Feely, with whom I had been engaged in an eternal joust since the day of my birth; Feely whom I always loved; Feely whom I sometimes hated" (pg 32), stoically throws herself into investigating these new mysteries as a way of avoiding this new loss in her life.

And Bradley writes this novel with the same zeal with which he has always approached his Flavia novels. And now he has given Flavia a foil in the form of Undine, her younger orphaned cousin now living in Buckshaw. Undine has always felt like an intruder there, treated more like an annoyance than someone who might have some good detection ideas, and she has been trying to prove herself to Flavia the whole time she has been living in Buckshaw. Will she ever get Flavia's respect? 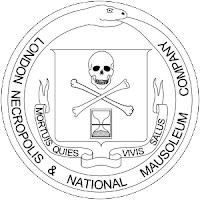 Bradley has a way of incorporating interesting bits of trivia into his novels and this one is no different. I found the idea of the London Necropolis Company fascinating and I suspect fans of Flavia will too. And riding the same rails from Waterloo Station to Brookwood that this one famous funeral train traveled on is the first official act of Arthur W. Dogger & Associates and seems just so absolutely appropriate.

The Golden Tresses of the Dead is as delightful to read as all the previous books. It is supposed to be the last Flavia de Luce novel, but boy, it sure doesn't feel that way and let's hope it isn't.