War is Over by David Almond, illustrated by David Litchfield 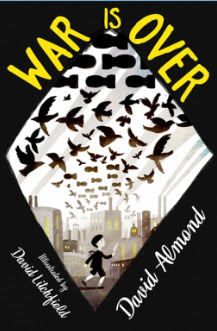 David Almond has always been one of my favorite authors, so when I saw that he had written a book commemorating the centennial anniversary of the end of World War I, I knew I had to read it. If you are already familiar with Almond's books, you know they are always tinged with a bit of magic mixed into his spot on depictions of time and place, and characters who are just trying to make sense of the world around them. And so it is with this novella.

How, young John and his classmates want to know, can they be at war with the Germans, they're only children. It's 1918 and all John has ever known is the world at war. His father has been fighting in the trenches in France for so long, John barely remembers him. And his mam has been working 12 to 24 hours a day in the world's largest munitions factory near their home, making ships, and bombs, guns and shells. John worries about both his parents - his dad getting killed at the front, his mam in a accident at the munitions factory, and he just wants to know when the war will be over. First, he asked the king in a letter, but never heard back from him; next he wrote the Archbishop of Canterbury, who likewise didn't respond. There were not answers at school, either.

Then, on a class trip to the munitions factory, John sees a man speaking out against the war, telling them that children are not at war, and them showing pictures of German children, children who look  just like they do. The man, Gordon, is a conscientious objector, or conchie, and is beaten by three men, but not before John rescues a picture of a German boy named Jan.

John tries to write to Jan, but oddly enough, he runs into Jan in the woods near his home after having spent some time with Gordon, who gives him his white feather, considered to be a symbol of cowardice. John and Jan are just alike, and both agree that they are not at war with each other. But, just as suddenly as he appeared, Jan is gone.

Desperate for peace after his meeting Jan, John begins to dream of a time when there would be peace, when everyone could be friends again. And when peace finally does come, John determines that he will go to Germany and become friends with Jan someday.

War is Over is a powerful anti-war novella about a child confronting the horrors of war on the home front and expressing the kind of confusion about what he sees and hears that you would expect from a child. John's teacher's extreme jingoism is really evident in the militarist way he treats people, including his class, and his nationalist ideas, especially his contempt for Gordon, the conscientious objector. You can really the sense the contempt he feels for John, treating him as though he is a conchie-in-training. In fact, everyone, including John's mother, is afraid to be seen as unpatriotic. When John's letter to Jan is confiscated by the authorities, she almost turns her back on her own son.

Almond doesn't glorify or celebrate war and David Litchfield's black and white illustrations support that throughout the book. Though they are done in a cartoon-like style, they are no less poignant as they still capture all the horror of war in the trenches and on the home front in a town that supports war. I think one of the most effective illustrations shows the transition for children playing war into soldiers fighting at the front. This image is from Litchfield's website but I decided to use it instead of the black and white image in the book so you can see the transition more clearly, not just of the children, but of the falling leaves becoming dropped bombs:

War is Over is a powerful book that tackles some difficult themes that are as relevant today as they were in 1918. Jingoism, nationalism, patriotism, cowardice, bravery, the impact of war on children and families are all addressed as John observes the world around him. This is a heartbreaking, yet hopeful story, one you won't soon forget. Pair this with Captain Rosalie by Timothée de Fombelle for another view of how war impacts children.

Listen to David Almond talk about and read from War is Over: