The Librarian of Auschwitz by Antonio Iturbe, translated by Lilit Thwaites 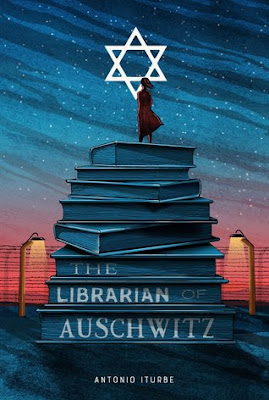 In December 1943, Dita Adlerova, 14, along with her parents and 5,000 other Jewish prisoners arrived at Auschwitz-Birkenau from the Theresienstadt ghetto (also referred to as Terezín) in Czechoslovakia. Unlike most of the Jews who were transported to Auschwitz-Birkenau, this transport arrived with the notation SB - Sonderbehandlung. No one really knew what was meant by special treatment, but they were put into one of nine separate camps in Birkenau, called BIIb, and referred to as the Theresienstadt Family Camp. These prisoners were allowed to keep their clothing and their hair wasn’t shaved, although living conditions were just a deplorable as elsewhere in Auschwitz.

Thanks for Fredy Hirsch, the prisoner in charge of the children, Dita becomes an assistant in Block 31, a barracks that has been converted into a space for children during the day so that their parents can work. It is also a place that houses a secret school which includes a library of eight books that have been smuggled in by other prisoners and are in various states of disrepair. Dita’s job is to care for the books every day - removing them from their hiding place, delivering them to the teachers, and carefully putting them back into their hiding place. Dita takes her job so seriously, that when a surprise inspection that includes Dr. Josef Mengele happens, she risks everything to hide the books under her smock.

But later that day, Dita runs into Mengele again,and she believes that he seems to know that she was hiding something that morning. He tells her he will be watching her from now on. His threat informs Dita’s life in Auschwitz with additional fear from then on, yet it doesn’t stop her from continuing her job as the librarian.

The Librarian of Auschwitz is a powerful novel with a brilliant blending of fact and fiction. It is told mostly in the present tense, and I think the writing style may remind you of The Book Thief, especially the voice of the omniscient narrator who knows what has happened as well as what will happen. And I have to be honest and say it is a difficult book to read at times, but then, so are all books about the Holocaust.

Several of the characters are based on real people. Most of the Nazis in charge of Auschwitz, like Josef Mengele, the Doctor of Death, and Rudolf Höss, the camp commandant. The main character, Dita Adlerova, reflects the experiences of the real librarian of Auschwitz, Dita Polach Kraus, whom Iturbe interviewed in Israel when he was researching this novel. Iturbe also includes the stories of Fredy Hirsch, Rudi Rosenberg, and SS First Officer Viktor Pestek. Hirsch and Rosenberg were prisoners in Auschwitz, while Pestek was a guard who fell in love with a young Jewish girl. Other characters in the novel are strictly fictional, but whether real or fictional, each one contributes to the overall picture that Iturbe draws of this section of Auschwitz, an anomaly in what was a place where most people were sent to be killed upon arrival.

And Dita's story is certainly an exemplary one. In the midst of so much heartbreak and horror, Dita derives a real sense of strength and purpose as the librarian, coming up with ways to improve the delivery of the fragile books to teachers, and carefully repairing them each day when they are returned. And, with the help of Fredy Hirsch, her sense of purpose develops into a way that Dita is able to cope with her own overwhelming fear, learning to accept it as part of who she is, and by recognizing it, she is able to overcome it and go on despite everything.

Thus, Iturbe’s draws Dita as a study of courage in the face of fear, and it becomes all the more poignant and admirable as she faces the horrors of Auschwitz, and later Bergen-Belsen. And while the actual atrocities that were endemic in the Nazi’s concentration camps and their treatment of Jews are difficult to fully capture in words alone, readers should know that Iturbe doesn’t hold back, that some of what he writes is quite graphic.

Though fear, hunger, cold, death, cruelty, and loss of loved ones are the daily experiences of Dita and the other prisoners in Auschwitz and Bergen-Belsen, ultimately The Librarian of Auschwitz is a life-affirming novel that manages to end on a note of hope for the future.

A Teacher's Guide for The Librarian of Auschwitz is available from the publisher, Henry Holt and Co. (BYR) HERE