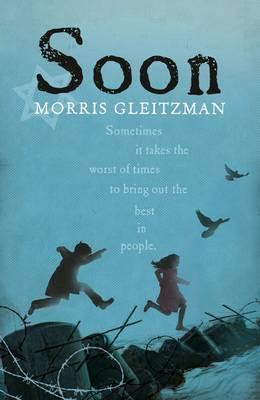 It's 1945 and the war is over but not the danger.  Felix, now 13, and Gabriek are hiding out in a relatively safe albeit rather wrecked building, and have one simple rule - Stay quiet and out of sight.  There are roving bands of men wearing badges that say Poland for the Poles and never hesitate to shoot anyone who is Polish, and that includes Felix, who is Polish, but he's also Jewish.

The war was hard on Gabriek and Felix who lost quite a few people they loved very much, and now Gabriek spends most of his time sleeping off the cabbage vodka he makes in his still, when not doing repair work to get food for the two of them.

Felix, who wants to become a doctor, goes how on the streets with his "medical bag" and the skills he learned from Doctor Zajak, when he and Gabriek joined the partisans before the war ended.  While out looking for people to help, Felix runs into two people - Anya, a mysterious girl wearing a filthy pink coat and carrying a gun, and Dimmi, who threatens the lives of Felix and Gabriek because the lock they fixed for him has broken.

Felix isn't out on the street long before he is kidnapped by the Poland for the Poles thugs who require his "medical services."  Luckily, Felix escapes and back on the street, a woman throws her baby to him just before she is shot to death.  Felix is immediately smitten by the baby and brings him home to an unhappy Gabriek.

It turns out that Anya is living in an orphanage with other kids under the care of Dr. Lipzyk, who invites Felix to visit his medical library anytime he wants to.  But things happen that make Felix uncomfortable about the doctor.  First, nothing seems to be done about Anya constant vomiting, then, Felix makes a deal with Anya for an endless supply of powdered milk and other baby needs for Pavlo (yes, Felix and Gabriek name the baby a nice Ukrainian name, since his mother was from the Ukraine), and lastly, the doctor cold attitude toward him when he sees Felix without pants on.

In the post-war danger and chaos in Poland, where hate and bigotry still seem to rule the day, will Felix be able to retain his hopeful spirit that the world will someday be a safe and happy place?

I wasn't expecting a 5th book and I may have jumped the gun a little in my need to find out more about Felix's experiences during World War II when I ordered it from The Book Depository.  It's out in Australia, New Zealand and Britain, but I don't know when or if it will be published in the US.  But is is do worth reading, even though I didn't get any sense of closure when I finished it - but perhaps that is as it should.

Soon is an action packed novel, partly because Felix is able to go out among people in a way that he hasn't been about to for a long, long time.  And amazingly, Gleitzman has managed to keep Felix a consistent character in Once, Then, After, and now Soon even as he matures, and despite some of the horrific things he has witnessed (I don't count Now because it is about Felix at 80 year old and not told from his point of view).  Felix is a character who seems to understand human behavior instinctively even if he does still read some behaviors incorrectly at first, but that is just because he is an optimist.  And readers can't help but care about what happens to him.

Soon can be read as a stand alone book, but it would be a much richer experience if readers at least read the first three books.  And like all of the Felix and Zelda family of books there is violence, but not sex or bad language.

Once again, Gleitzman has explored themes of family and friendship in the worst of times and written a powerful, appealing novel and now I would really like to know what happens to Felix next, but I have a feeling it's not going to happen this time.