The Book of Pearl by Timothée de Fombelle, translated by Sarah Ardizzone and Sam Gordon 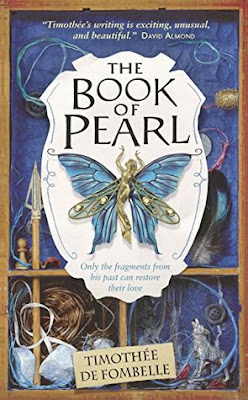 I absolutely loved reading Timothée de Fombelle's two historical fiction novels, Vango: Between Earth and Sky and Vango: A Prince Without a Kingdom, so when I saw that he had another new work I couldn't wait to read it, too. And it was, quite simply, wonderful.

de Fombelle has spun a mesmerizing tale that seamlessly weaves together the world of fairy tales and the real world over different time periods. He begins his tale, in this world, with a 14 year old unnamed, unreliable narrator, who heart has just been broken by a girl who once was a fairy, stumbling upon the house of a recluse named Joshua Pearl. Inside the house, the narrator discovers hundreds of suitcases collected by Joshua Illiån Pearl. Asked what is in the suitcases, all the narrator is told is that they contain things needed for him to return to where he came from.

Who is Joshua Pearl and where did he come from? The narrator writes "the only thing I'm sure about are these first words: "Once upon a time." A young boy standing outside a marshmallow shop in Paris in 1936 is taken in by a man and his wife, owners of Maison Pearl, a couple whose son, Joshua, had died two years earlier. Not knowing how he ended up at the shop and with only bits of memory from his past life, the boy stays with the couple, who treat him like their own son. During Christmas, 1938, the boy found his first link to where he came from in a book of fairy tales that mysteriously appeared in the the kitchen of Maison Pearl while he was cleaning up. He knew then that he had to leave to find his way back to where he came from.

Meanwhile, fascism is on the march in Europe, and when war breaks out, the boy secretly enlists in the army under the name of Joshua Pearl. In June 1941, Joshua and a companion are captured by the Germans and sent to a prison camp in Westphalia, but not before telling his companion the truth about himself. In the camp, Joshua discovers a man wearing a mermaid's scale around his neck, a second link to his former life. Eventually escaping the stalag with the mermaid's scale, Joshua ends up fighting in the resistance. There, his captain tells him that the war will stop only when the world is really to believe, but they are not ready yet, so they must have tokens of proof about what is happening.

It is these words and having already acquired the Mermaid's Scale that sets Joshua Pearl on the quest of collecting tokens of proof that will take him back to the Kingdoms, back to where he came from.

In between the tale of Joshua Pearl, whose real name is Illiån, the reader also learns the story of Oliå, the fairy that Illiån loves and wants to return to, not knowing that she had given up her powers as a fairy to be near him in the real world. But before she did that, she was cursed and told that the moment he looked at her, she would disappear forever, she could only see him from a distance. Despite their love, they could never be together.

As for Illiån, before he became Joshua Pearl, he was the younger brother to Iån, who seized power to rule over the Kingdoms from his father, the King, at age 13, with the help of Taåg, an old genie, and Iån's godfather and adviser. Iån orders that Illiån be killed because he has also fallen in love with Oliå. But Taåg disobeys Iån and banishes Illiån to a far away world from which there is no return.

Three intertwined stories lines over three time frames makes for a difficult novel to review without spoilers, though I've tried not to include any. If I have, I apologize in advance. I know this sounds like such a complicated novel, but it is a such skillfully and meticulously crafted, that the readers goes from story to story, time period to time period without getting confused. Not that it is a flawless work, but the flaws and holes in the plot are minor enough that they don't take away from the story at all.

Each character is well defined, and each world is totally imaginable. At times, de Fombelle keeps the reader in such suspense about what will happen next, it is hard to put down. I began reading this on the train from NYC to Washington DC, and I could have ridden for as long as it took me to finish in one sitting (alas, that didn't happen and I had a busy few days ahead of me with not much reading time).

In the end, it is that 14 year old boy, now a man with a wife and family of his own, who goes back to that house of the reclusive Joshua Illiån Pearl, and who ultimately writes this story using those precious tokens of proof.

The Book of Pearl does an absolutely brilliant job of asking the reader to consider this: do we create stories or do stories create us, or perhaps, is it a combination of both.

This book is recommended for readers age 12+
This book was an ARC received from the publisher, Candlewick Press
Posted by Alex at 12:17 PM