When the United States entered World War II, people of all ages on the home front were urged to do whatever they could to help the war effort. Naturally, Diana Hopkins, the ten-year-old  daughter of President Roosevelt's chief adviser Harry Hopkins and White House resident, wanted to help, too. But everything she tried, just didn't work out well in the White House.

So, when the President said that he wanted everyone to grow their own food as part of the war effort to keep both soldiers and citizens strong and healthy, that included the White House lawn. Diana jumps at the chance to help out with the President's proposed Victory Garden and before she knows it, she is sporting a pair of overalls, turning the soil, fertilizing it, and planting beans, carrots, cabbages, and tomato plants. Even Mrs. Roosevelt helps out on occasion.

With the help and guidance of Mrs. Roosevelt, George, the groundskeeper, and Fala, the President's little scotty dog whose job it was to keep the rabbits away, Diana's garden thrives. By harvest time, flouishing has a flourishing garden ready for picking and eating.

Diana’s garden was made famous when newspapers and magazines published pictures of her working in her garden, wearing her overalls, an inspiration to kids all over the country to follow her lead:


Diana’s White House Garden is a lovely picture book work of historical fiction for young readers that shows how kids can sometimes do things that can make a big difference. Without going into the specifics of World War II, the need and desire for a Victory Garden comes across in a very age appropriate way and the real emphasis is on helping out, perseverance (especially after rabbits eat her first sprouts) and the rewards to be reaped as a result, including the feeling of accomplishment.

The simple line pencil, gouache, and digital drawings done in a palette of earth tones on a cream background reflect not just the time period, but also the idea of working in the soil. Of course, Diana’s big, red tomatoes, lovely orange carrots, and deep green cabbages might inspire any to create their own Victory Garden, even today.

One bit of reality: President Roosevelt wasn't really very keen on a Victory Garden, it was Mrs. Roosevelt’s idea. It was only after he had seen and tasted the fruits of their labor that the President became enthusiastic. You can read all about it at City Farmer News. However, this by no means should diminish your enjoyment of Diana’s White House Garden.

This book is recommended for readers age 5+
This book was borrowed from the NYPL
Posted by Alex at 7:42 AM No comments:

Gay-Neck: The Story of a Pigeon by Dhan Gopal Mukerji, illustrated by Boris Artzybasheff 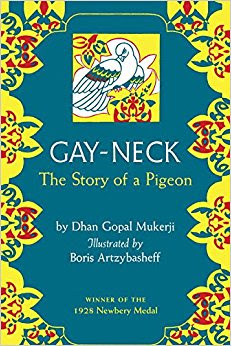 This is a book I’ve had sitting on my shelf for years and just never got around to reading. But I recently read two very interesting articles about the author, Dhan Gopal Mukerji, which spurred me to action. I pulled the book off the shelf and finally read it. And while it is usually considered a WWI story, it is really much, much more than that.

Born into a Brahmin family, Mukerji had raised pigeons growing up in Calcutta, India in the early years of the 20th century just like so many boys his age and caste did at that time. Calling upon his own experience with his flock of 40 birds and the experiences of others, Mukerji writes about this special pigeon’s life story. Almost from the moment it was born, it’s young owner knows this is a special pigeon, beautiful and smart. The young master decides to name him Gay-Neck or Chitra-griva, Hindu meaning “painting in gay colours.”

At first, it is up to Gay-Neck’s parents to teach him to fly, and to defend himself against hawks and eagles, a pigeon’s natural enemies, but soon his master takes over with the help of Ghond, a family friend and hunter who is familiar with India’s forests, mountains, and wild life. Together, they take Gay-Neck on trips further and further from home in Calcutta, releasing him to see if he will return to Calcutta. Gay-Neck’s training is successful, but not without mishaps, including having to retrain him after he becomes frightened to fly again because of a hawk attack.

I found Gay-Neck: The Story of a Pigeon to be a very interesting book for a number of reasons. First, there is the story of just how a homing/carrier pigeon is trained, something I’ve wondered about whenever I’ve read a book about their use in war. Mukerji goes into quite a bit of detail about this, carefully describing how to begin training them and why a trainer might have to tie a pigeons’s wings to prevent it from flying, as well as the retraining process after the pigeon has been attacked or become frightened as Gay-Neck did on the battlefield.

Gay-Neck is also a window into the life of an Indian boy from a high caste. Gay-Neck’s young master (like Mukerji himself), has the leisure time and money to spend on raising his flock of pigeon’s, living in a two story private home with a flat roof for the pigeon coops.  There is no mention of the British until the war, even though India was still a colony of the British Empire, nor any mention of the poorer people in Calcutta.

But it is Mukerji’s descriptions of natural and religious life that really makes this novel. Whether they are in the jungle, dealing with a tiger, an angry elephant, a killer water buffalo, or resting and meditating at a lamasery with the lamas, or describing the majesty of the Himalayas,  the writing is always beautiful and the language simply poetic. even when Mukerji is graphically describing the action on front lines. At times, during the war, Mukerji writes from Gay-Neck’s point of view since his master was only a teenager and couldn’t accompany his bird to the front. Thus, the reader is able to read what Gay-Neck sees and experiences, from a wild dog at the front, to machine eagles spitting fire in the sky.

And, the dramatic black and white graphic illustrations by Russian-born artist Boris Artzybasheff are the perfect compliment to this book. 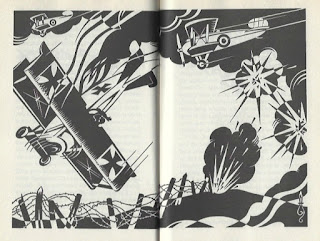 While I enjoyed finally reading Gay-Neck, what I am not sure about is whether this is a book that would appeal to today’s young reader. Plus, sensitive readers should be aware that there are some graphic descriptions throughout this book.

Gay-Neck won the Newbery in 1928 and I believe, the author is the only Indian author to have won that award to day. You might want to read these recent articles about Dhan Gopal Mukerji. You can find them HERE and HERE

This book is recommended for readers age 10+
This book was purchased for my personal library.
Posted by Alex at 12:36 PM 2 comments:

Letters from the Lighthouse by Emma Carroll 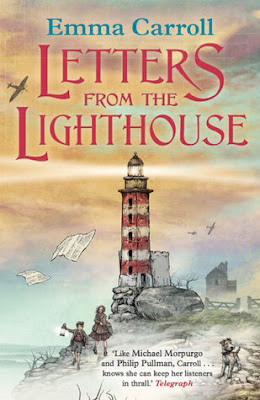 I was inspired to read this novel when I read about it on Mr. Ripley’s Enchanted Books
last June. So I ordered a copy from The Book Depository and began reading the day it arrived and finished it in one sitting. Needless to say, it is a really good novel.

It’s February 1941, and even though it isn't usual, older sister Sukie Bradshaw has decided to take siblings Olive, 12, and Cliff, 8, to see a movie after tea. But no sooner do they get through the newsreel but the air raid siren goes off. To make matters worse, Sukie has disappeared. Leaving her brother at the Underground shelter, Olive goes in search of Sukie, and just as she reaches her sister, another bomb falls way too close to them. When Olive wakes up in hospital, she learns that Sukie is still  missing, and that she and younger brother Cliff are going to be evacuated to Budmouth Point, on the Devon coast, for safety.

Olive has already lost her dad to the war when his plane was shot down, and can’t bear that her sister may be gone too. But how can she figure out where Sukie is and who the man she met just before that bomb fell is if she’s in Devon? Still, as soon as she is able, Olive and Cliff are sent to live with Queenie, the sister of their London neighbor, and Sukie's supposed pen-pal.

Things don’t work out at Queenie’s, who is always busy doing all kinds of work in the cellar, and using Olive to make deliveries for her around the village. It gets especially hairy after Olive is forced to share her room with Esther Jenkins, an evacuee with whom Olive already has a contentious relationship. Olive and Cliff soon find themselves living with Ephraim, the lighthouse keeper. Life is better at the lighthouse, where Ephraim insists on doing everything, where the food is better and Cliff even has a dog to pal around with.


It doesn’t take long for Olive to realize that there’s an awful lot of activity on the lighthouse radio, much more that seems right. Meanwhile, Olive is also trying to work out the coded message she found in the coat Sukie was wearing the night she disappeared. The longer Olive is lives in Budmouth Point, the more she realizes that Sukie’s disappearance just might have something to do with the clandestine activity she's noticed among some of the village residents…but what could it possibly be?

Letters from the Lighthouse is an exciting adventure and Olive is very appealing, lively narrator. There was something about her story that reminded me so much of the books I read about kids in WWII that were written during the war. The thing I noticed in those books was the ability to carry on despite the uncertainly of the future. One always hopes for the best, and that is the feeling that Carroll captured writing about Olive's search for Sukie - she is so convinced her sister is okay somewhere in the world and she needed to figure out where.

As Olive's story unfolds, Carroll also provides the reader with a window though which to see and understand just what it means to be a child and live in a country at war and under siege, realistically depicting the fears and the privations, as well as the importance of family. the value of friends and neighbors, and need to learn trust and tolerance. Heading each chapter with expressions, warnings, and advice that were common during the war also helps give the novel a sense of authenticity.

As much as I enjoyed Letters from the Lighthouse, I did have a few plot points that bothered me - like how did Olive end up with the coat Sukie was wearing when the bomb fell in London, and how what happened to Sukie actually happened. They were explainable, but not to my satisfaction. BUT, these were not game changers for me, and if you like historical fiction about WWII, they shouldn't be for you either.

WISHING YOU A SAFE AND HAPPY FOURTH OF JULY 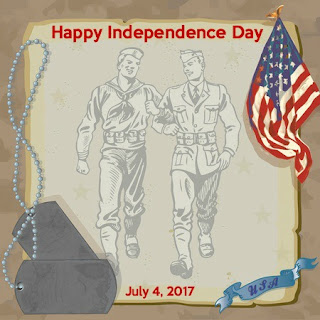