I Survived the Hindenburg Disaster, 1937 (I Survived Series #13) by Lauren Tarshis, illustrated by Scott Dawson 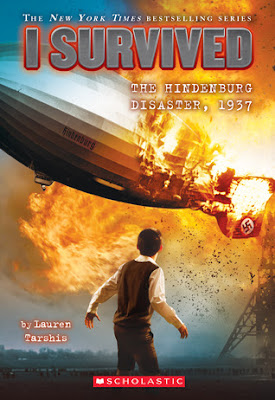 It's Monday, May 3rd, and Hugo Ballard, 11, is about to embark on an exciting journey flying from Germany to New Jersey on the Hindenburg, one of two zeppelins crossing the Atlantic Ocean in 1937. Hugo had already had one big adventure, living in Kenya with his mom, dad, and younger sister Gertie for a year. But now Gertie is sick with malaria and needs to get home to NYC for the right medicine as quickly as possible and the zeppelin could get the family there in only three days.

The Hindenburg is big, almost as big as the Titanic, but it's a highly flammable gas, hydrogen, that gets the zeppelin off the ground and flying. And that's a pretty scary thought for Hugo and Gertie, but almost immediately, Hugo makes a new friend, Martha Singer, or Marty as she prefers. Marty is a zeppelin pro, this is her eight Atlantic crossing in one, thanks to her dad who works for the company. "It's magical" she tells Hugo, and indeed, it seems to be so. Even Gertie is looking and feeling better.

The next morning, Tuesday, May 4th, at breakfast, however, Hugo's good feelings about being on the smooth-riding zeppelin with a new friend are somewhat diminished by the appearance of Nazi Colonel Joseph Kohl, known for his viciousness (even Gertie thinks he looks like a snake) and two other Nazi officers. When they leave, one of the passengers says that he believes the Nazis are looking for a spy on board the zeppelin.

On Wednesday, May 5th, the day before the zeppelin is scheduled to arrive at the airfield in New Jersey, Mr. Singer offers to show Hugo and his dad around the ship, even taking them into its main body, usually off limits to passengers. While there, Mr. Singer hears a terrible, unfamiliar growling noise. Alarmed, he starts to call the ship's captain, when Hugo realizes it is none other than their dog, Panya, who was put into the cargo hold for the trip. But their tour is interrupted with news that Gertie is once again very sick. After a long, scary night, Gertie's finally fever breaks and the only thing she wants is Panya.

But when Hugo sneaks down to get the dog, he sees someone else there. Is this the spy who is sneaking German secrets back to the United States? Apparently Colonel Kohl thinks so, too. After threatening Hugo with his gun, he manages to get away and get Panya to Gertie. But does an even deadlier fate await the Ballad family when the Hindenburg suddenly erupts in flames while landing?

I Survived the Hindenburg Disaster, 1937 is, like all the I Survived books, very exciting with themes of courage, resilience, and the importance of family. And Tarshis is genius at being able to weave these into a gripping tale in the midst of a dangerous historical event without distorting any of the history. She has included lots of information within the story about zeppelins, how they work and their use, even during World War I when they were used to drop bombs on civilians in both France and England. I knew airplanes were used for that, but I didn't know about zeppelins.

Nor does she shy away from Nazi violence or cruelty and yet it is never gratuitous. In this novel, Colonel Kohl is portrayed as the kind of cold-blooded Nazi who would not think twice about shooting Hugo to get what he wants. But Tarshis also always makes sure to surround her protagonist with kind people, too, as she does here with Hugo's parents, Mr. Singer, and Marty. And her protagonists are also kind people. Hugo risks a lot to make his sister happy, but he knows what he has to do. And when the ship erupts in flames, his first thought is how to save his family.

Tarshis has also included even more information about zeppelins and the Hindenburg disaster in her back matter, beginning with the question "Would you want to ride on a zeppelin? To which my answer would be unequivocally no, thank you, although I do appreciate the excitement and spectacular views of such a ride. There is also a section about the possibilities of why the Hindenburg disaster happened (to this day, no one knows), More Hindenburg Facts, and a Selected Bibliography.

This book is recommended for readers age 7+
This book was provided to me by the publisher, Scholastic Press

If you would like to know more about zeppelins, be sure to visit airships.net

And if you are curious about what Hugo saw on his tour of the Hindenburg, this is the best example of the inside of it I could find (you can even see the catwalk where Hugo had to walk to get Panya for Gertie): 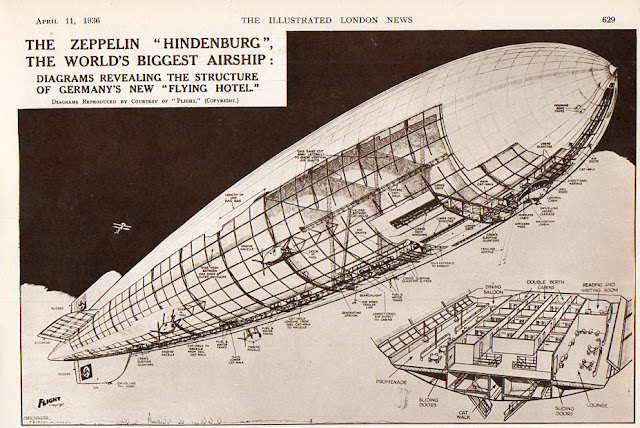