Stubby: A True Story of Friendship by Michael Foreman 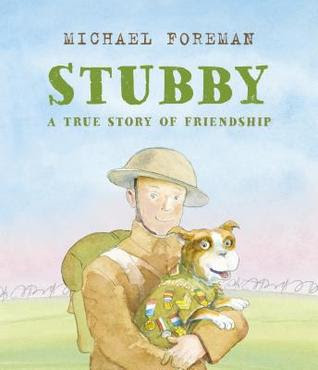 2018 was the 100th anniversary of the armistice that ended World War I and to commemorate it, a fair number of books for young readers were published. Stubby is one of those books and his story begins in a training camp far away from the war.

For some soldiers, basic training can be a cold lonely process of endless drills and exercises. But in one particular camp, each time the bugle calls soldier's to a meal, stray dogs from all over always seem to show up, too. One of them takes a real liking to one particular soldier [Robert Conroy] and before you know it, man and dog have bonded. The soldier names the dog Stubby.

Stubby is pretty smart, and learns to sit and to salute quickly and, of course, everyone seems to love him, But when orders come that the soldiers are shipping out, sailing across the Atlantic to a land at war [France]. Stubby is supposed to stay home, but at the last minute, he gets smuggled on to the troop ship.

In the trenches, Stubby's excellent sense of smell and hearing more than once comes in handy, catching enemy soldiers who sneak into the trenches, or warning the men of poison gas attacks in time to put on their gas masks (yes, Stubby also has a gas mask), and sometimes just keeping his master warm on cold, rainy nights.

But when Stubby is injured in battle, he is sent off in an ambulance with other wounded soldiers and his owner wonders if they will ever see each other again. But, Stubby's nursed back to health at a field hospital just like a real soldier, and after six weeks, he is returned to the tranches. When the enemy is finally driven out a one town, the local ladies get together and make Stubby his own army jacket, complete with medals and badges.

When peace is finally declared in 1918, Stubby returns home to the United States a hero and is even given a position of honor at the front of a victory parade.

This is a sweet story, not so much about Stubby heroics during the war, though these are certainly included, but about what a good, loyal companion he was to Conroy. And to keep the story focused on Stubby, Foreman never uses Conroy's name and makes the dog the main focus of the illustrations.
The illustrations are done in Foreman's signature style, using a soft pastel palette. He doesn't shy away from the realities of war, but none of the battlefield illustrations are so graphic they would upset young readers. Even the illustration of Stubby laying unconscious in the midst of fighting isn't frightening, but kids will definitely know Stubby is injured.

Be sure to read Forman's note at the back of the book, complete with a photo of Stubby in his army jacket.

Stubby: A True Story of Friendship is a heartwarming story, made all the more poignant by the fact that it is a true story.

You can download an extensive Teaching Guide courtesy of the publisher, Anderson Press