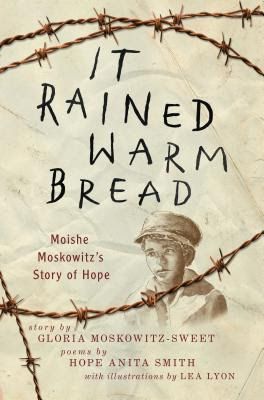 **Contains Spoilers**
This fictionalize free verse biography chronicles the life of Moishe Moskowitz's life just before and then during the Holocaust. In 1936, Moishe, his mother, father, older brother Saul, and younger sister Bella live in Kielce, Poland. Their home life is warm, loving and religious, though there is some they watch the Nazi threat grow stronger and come closer. On the street, Moishe often has to be on the lookout for Polish boys who "want to pound me like schnitzel" simply because he is Jewish. Moishe's mother often encourages his father to leave for America where they have relatives, and save enough money to send for the family. However, his father keeps refusing to leave, finally agreeing only to discover the opportunity has passed.

Moise is 13-years-old when Nazi Germany invades Poland, and the lives of the Jewish families living there are forever changed. At first, the Moskowitz's hide out in the barn of a Christian friend, but when nothing happens, they decide to return home, only to be rounded up in 1941 to temporarily live in the Kielce ghetto. Somehow, Mosihe's father escapes and joins the resistance. From there, in August 1942, the ghetto is liquidated and Moise's mother and sister are pulled away from the family - never to be seen again.

Moishe and Saul are moved from one concentration camp to another. When his brother comes up with an escape plan, only Moishe survives and, now alone, is sent to Auschwitz, to do hard labor. By 1945, when it is clear the Nazis are losing the war and the Allies are closing in, Moishe finds himself on several death marches. During the first march, he pretends to fall down and manages to convince the guards that he is actually dead. When an unkind farmer finds him, Moishe is put into another group of Jewish prisoners, where he is put into a cattle car. It is here that he finally finds the hope he needs to carry him through, when a group of Czechoslovakian women defy the Nazi guards and toss warm, freshly baked bread into the cars for the people in the cattle cars.

Taken off the train, Moishe begins his second death march, trying the same tactic he used before of falling down as though dead. Left behind, he hides in a haystack. It's here an American soldier who speaks Yiddish finds Moishe.

Yes, Moishe survives the Holocaust and eventually makes his way to Los Angeles, California where he marries and raises a family.  And like most Holocaust survivors, he was reluctant to talk about his experiences under the Nazis. But finally he did, and now his daughter Gloria as shared his stories to poet Hope Anita Smith and together they wrote Moishe's story.

It Rained Warm Bread is told in the first person through a number of short spare, sometimes understated, poems, and divided into seven chapters, each focusing on specific events and time in Moishe's life, Smith has created a record that is as heartbreaking as it is hopeful. Interestingly, the Nazis are metaphorically referred to as predatory wolves throughout, and never really portrayed as human.

The text and the small watercolor wash spot illustrations are all done in shades of brown, and add much to this testimony of a man who bore witness to what was done to Europe's Jews during Hitler's reign.

It Rained Warm Bread is not the book to read if you are looking for a factual account of what happened to Moishe and his family. If that's what you want, or if, after reading Moishe's story you want to find out more, you can find an account of Kielce and the Kielce Ghetto HERE.

Instead, be sure to read the Author's Note by Moishe's daughter Gloria for more information about this courageous man who lost everything but found the hope he needed to carry him through those dark days.

This book is recommended for readers age 9+
This book was purchased for my personal library
Posted by Alex at 12:01 PM