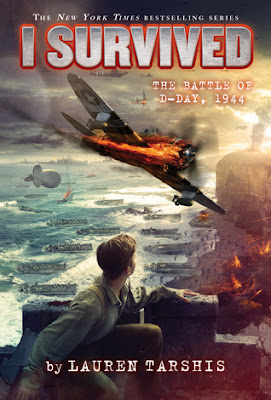 Lauren Tarshis's I Survived series has introduced young readers to a variety of significant, but scary events that have occurred in both recent and distant history through a young eyewitness protagonist. With the same themes of courage and resilience the protagonist didn't realize they possessed, they become active participants in these events, providing the reader with an exciting fast-paced story and lots of historical background information. In her latest book, Tarshis takes her readers to France's Normandy coast just before and after the D-Day invasion on June 6, 1944.

Living there in the town of Le Roc, Paul Colbert, 11, has waited and waited for the Allied Forces to come and rescue France from the hands of the Nazis and end the war. After France had fallen to the Nazis in 1940, his father had been arrested and sent to a German prison camp; then his best friend Gerard and his family were arrested by the Nazis because they were Jewish and had disappeared. Later, Paul had seen his favorite teacher, Mr. Leon, being pursued and shot by Nazi soldiers for being in the resistance, and he watched in horror as his hero sank into a river.

But just as he is beginning to lose hope, it's Paul's turn to be a hero when he discovers an American paratrooper caught in a tree and injured. Paul knows that helping this man is dangerous if the Nazis catch him, especially with Nazis soldiers nearby looking for the paratrooper. But despite his fear, Paul climbs the tree and frees the American, whose name he learns is Sergeant Victor Lopez. But now, the wounded Victor needs a safe place to hide and Paul knows just where to take him. The old, crumbling Castle Le Roc isn't a place anyone wants to be in, what with the all the stories that told about it, and Paul knows how to get there so the Nazis don't discover them. So, imagine Paul's surprise when they are greeted at the castle by a man pointing a rifle at them.

Little does Paul realize that he has stumbled into a resistance hideout and that his life is about to change. Not only does he discover Mr. Leon is still alive and working for the resistance, but so is his mother. At the moment, resistance fighters all over France are waiting for the code that will let them know the D-Day invasion, what Mr. Leon called "the largest invasion by sea in the history of the world," is happening. And now even Paul has a part to play in it.

I Survived the Battle of D-Day, 1944 was written to commemorate the 75th anniversary of the D-Day invasion on June 6, 2019. It is the 18th novel in the I Survived series and like the 17 that came before it, it is an exciting novel that will not let readers down. And while the main focus is on the anticipated Allied invasion, the novel also introduces young readers to the important work of the French resistance and the dangers involved in that kind of work.

Some of the descriptions of Nazi cruelty toward their enemies, and some of the scenes of the Normandy coast during the invasion are a little more graphic than most books written for this age group, though none of it is gratuitous. But, as with all of the novels I've read in the I Survived series, the writing is excellent and completely accessible and there is lots of kid appeal. Paul is a sympathetic character, and readers will no doubt relate to his fears, but also cheer his bravery.

This is a serious story told about a dangerous time, but Tarshis includes some lightheartedness in the form of Ellie, the carrier pigeon who accompanied Victor to France and whose job it was to fly back to England and let them know he had arrived safely. But Ellie isn't about to abandon Victor, even after he is at Castle Le Roc. Good thing, she turns out to be a lifesaver and a real hero, too.

Tarshis has included a lot of back matter for curious kids, including a letter from the author to her readers about writing this book, answers to some questions about D-Day, and other points of interest to young readers, an overview of the vehicles used for the invasion (which I also found very informative), a Timeline, a list of books for Further Reading and a Selected Bibliography.

I Survived the Battle of D-Day, 1944 is a solid edition to the I Survived series, and is sure to appeal to kids who like exciting stories, historical fiction and/or WWII novels.

This book is recommended for readers age 7+
This book was sent to me by the publisher, Scholastic Press
Posted by Alex at 11:36 AM