I Survived #4: I Survived the Bombing of Pearl Harbor, 1941 by Lauren Tarshis 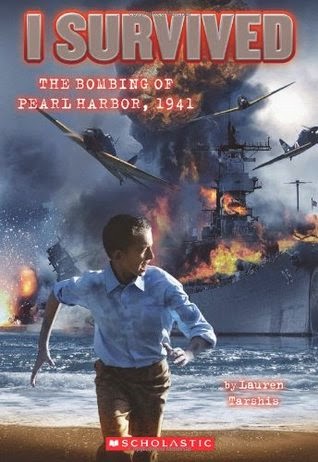 Living in New York City, Danny Crane, 11, and his best friend Finn were always in trouble.  Danny's father had skipped out before he was born, so his mother worked as a nurse by day and cleaned offices at night to support them and was often not home.  There are just too many kids in Finn's family for anyone to keep an eye on him  The two boys skip school, sneak into the movies, and pretty soon, they were hanging out with gangster Earl Gasky.

So, in late1941, Danny's mother takes a nursing job at the hospital at Hickam Air Force base on Oahu, Hawaii.  Danny hasn't been living in Hawaii for very long before he hatches a plan to stowaway on a ship bound for San Francisco on December 7th, and from there, he plans to cross the country riding the rails back to Finn and the life he loves and wants.

On the morning of December 6th, Danny meets his new neighbors when toddler Aki Sudo wanders into the Cranes backyard.  The Sudos are a family of Japanese descent that had been born in Hawaii.  And Aki Sudo may only have been 3 years old, but he knew every plane the Americans had in their Air Force, thanks to the detailed drawings his fisherman father drew for him.

Danny likes the Sudos, but he is still determined to get back to Finn and NYC.  Yet, on the morning of December 7th, Danny is having a hard time getting out of bed and setting his plan in motion.  Thinking about his mother and how she will feel when she discovers him gone, Danny is jolted out of bed by little Aki's cries.  Planes, swarms of them, are coming and they aren't American.  Suddenly, as the two boys are heading to the Sudo home, they hear loud explosions followed by fire and smoke.  Pearl Harbor is under attack.

Returning Aki to his mother, Danny decides he needs to get the Hickam, to find his own mother.  But along the way, there is another round of bombing, and shooting.  Then, Danny meets Mack, a  lieutenant and pilot of a B-17.  Mack likes Mrs. Crane, but Danny was resentful of that.  Now, though, with a bullet wound to his arm, he and Danny try to make their way to Hickam together.

But, will the two be able to survive the rain of bullets and bombs the Japanese pilots are unleashing on all of Pearl Harbor?

I Survived the Bombing of Pearl Harbor is the 4th book in this popular, action packed I Survived series for boys about boys living in different time periods and facing different historical disasters and making them real coming of age stories.  And, like the others, it won't let the reader down.  There is plenty of real historical information couched in the fictional story of Danny and since Danny more or less sees the attack on Pearl Harbor from a distance, the descriptions of it are realistic, but not so graphic they will upset the age appropriate reader.

One of the side issues that Lauren Tarshis addresses in this particular story is how easy it was for boys like Danny to fall into the wrong kind of life.  Danny is at an age when friends can be all important, so the reader sees how he is torn between staying with his mother and his loyalty to his friend and partner in crime Finn.  These two friends were on their way to being in real trouble when Mrs. Crane moved Danny to Hawaii.  Juvenile delinquency was a problem back then because so many parents, like Mrs. Crane, had to work long hours, often at two jobs.  Doing little things for someone like Earl Gasky was just the beginning.  Both boys are at an age when they could have gone either way and I wondered what happened to Finn, left in NYC.

Since I Survived the Bombing of Pearl Harbor is a work of historical fiction, the author has included lots of back matter for further exploration.  There is a lengthy Q&A about the actual attack, a Pearl Harbor Time Line, Pearl Harbor facts and resources for reading other books about kids caught in the bombing of December 7, 1941.

In addition, the publisher of the I Survived series, Scholastic, has put a Teacher's Guide online that is compatible with Common Core State Standards and it can be downloaded HERE

This book is recommended for readers age 7+
This book was purchased for my personal library
Posted by Alex at 10:15 AM