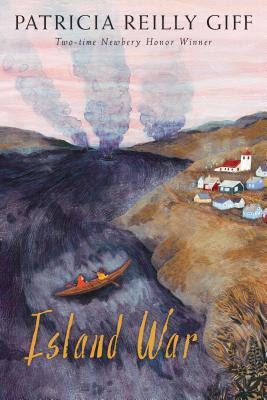 It's September 1941 and 12-year-old Izzy is beside herself with excitement at the idea of going to the Aleutian Island that her recently deceased father loved so much. Traveling with her mother, an ornithologist who will be studying the island's rare birds, Izzy isn't too happy when she discovers that Matt, an older boy from school, is also traveling to the same island.

Matt isn't at all happy about leaving his mom and traveling to an Aleutian Island with this remote father. He would much rather be rowing around Long Island Sound and cheering on his mom at her swim meets. And an encounter with Izzy on the boat doesn't help his attitude.

On the island, Izzy meets Maria, and the two girls immediately become friends, as well as the friendly but nameless village dog.  Matt is given a kayak by his father, who is as remote as ever, holed up in his room all day long and giving Matt freedom to kayak and explore whenever he isn't in school.

But when the Japanese attack Pearl Harbor in December 1941, and the United States enters the war, things change quickly. One Sunday morning, not long after Izzy and Matt's first Christmas on the island, Japanese soldiers arrive, shooting out the windows of everyone's home and rounding the people up inside the church. Matt's father has just enough time to hide the radio he has been using for a government job. After ransacking the homes and taking all the food, the Japanese soldiers send everyone back to their homes. From then on, the men go fishing everyday, and the barest minimum of their catch is given to the people, the rest kept for the soldiers. When Maria comes down with scarlet fever, Izzy is on her own.

Watching Matt, Izzy learns how he sneaks out of the village, through the barb wire wrapped around it, and begins escaping for a few hours of freedom, too. Matt's father suspects they will all be sent to a Japanese prison camp, and in September 1942, it begins to look imminent. One night, while away from the village, Izzy sees Matt's father being forced onto the Japanese ship. After realizing everyone is gone, Izzy believes she is alone on the island. Matt, who was out kayaking, believes the same thing when he returns.

Izzy and the village dog, whom she names Willie, head to Matt's house and find food there. When Matt arrives and accuses her of stealing, the two agree to stay away from each other. But when Izzy discovers some Japanese soldiers are still on the island, she realizes it's time to hide. Maybe she and Matt can find the cave her father had loved and told her about. When Matt falls and breaks his leg, the two are forced together in a battle for survival even as the island becomes a battleground between the Japanese and the Americans.

Island War is, without a doubt, an exciting story. Based on the actual occupation of two Aleutian Islands during WWII, Giff has woven a gripping story about two young, very different teens fighting for survival in the face of harsh elements and enemy soldiers. Ironically, their survival is helped by their absent fathers. For Izzy, it was the cave her father loved that provides shelter against the bitter winter cold and snow, while Matt's father provided him with skills to navigate the icy waters around the islands, among other life-saving measures.

The novel is narrated in first-person alternating sections by Izzy and Matt, so the reader knows exactly how each feels about what is happening to them and how they feel about each other. Interestingly, neither character particularly appealed to me at first, Matt felt like a moody, resentful teen, and Izzy too flighty and impulsive. So I particularly liked seeing how both characters grew and matured as the story went along and how the two former enemies had to learn to work together, and even begin to caring about one another, becoming more likable to the reader.

I've read a number of Patricia Reilly Giff's wartime novels now. She takes a real event and cleverly creates a story around it, presenting what life was like at each time and place during the war. In reality, the people living on the two Aleutian Islands occupied by the Japanese were all sent to prison camps in Japan, so Izzy and Matt's experience is strictly from her imagination, but still believable and certainly thought provoking.

I would most definitely recommend this book to anyone interested in WWII or simply historical literature. For an interesting, diverse look at life on the home front during WWII, I recommend this quartet of books by Patricia Reilly Giff: Island War, Willow Run (a young girl finds herself living in a village created for the war effort), Gingersnap (a young girl goes to Brooklyn looking for her unknown grandmother) , and Genevieve's War (an American girl visiting her grandmother finds herself living on the French home front).

And you could definitely pair Island War with Samantha Seiple's nonfiction work Ghosts in the Fog: the Untold Story of Alaska's WWII Invasion for a well-rounded look at this little known part of WWII history.

This book is recommended for readers age 9+
This book was an EARC received from Edelweiss Plus
Posted by Alex at 4:16 PM