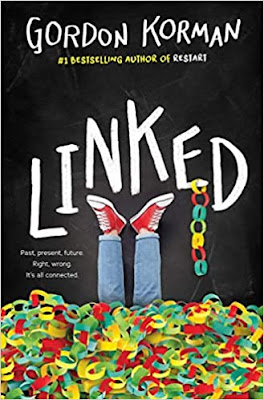 Just as he did in War Stories, Gordon Korman has brought WWII and the Holocaust into the present because, well, as William Faulkner reminds us the past is never past. The residents of Chokecherry, Colorado are reminded of that when a student, Michael Amorosa, discovers a large swastika painted on the atrium wall at Chokecherry Middle School. But who would do such a thing in this quiet very small town?

Chokecherry does have one thing happening that could put it on the map. After some dinosaur poop is discovered there, a group of paleontologists are sent to work on a dig hoping to find more dinosaur evidence. Among them is the Levinson family - the only Jewish family in town and daughter Dana Levinson is a student at the middle school, and who is very disturbed by the appearance of a swastika.

Meanwhile, prankster Lincoln Rowley, 13 and called Link, and his friends are caught trying to dump 80 pounds of smelly dinosaur poop through the mail slot at the paleontologist's office in town. When Link is caught in the act, his father bans him playing any school sports. Link's father has a dream of turning Chokecherry into the next great tourist attraction, complete with a Disney-like amusement park. But no sooner is the first swastika washed away, but more of them begin showing up in various places around the school.

The school's answer to this is to hold a three week course in tolerance education, but the swastika's keep showing up and so does some surprising history. It seems Chokecherry was the scene of an incident in 1978 that involved KKK groups surrounding the town's foothills with burning crosses, referred to as the Night of a Thousand Flames. It's a subject Link's father does not want brought up, but talking to his parents about it reveals a surprising history in Link's family. His mother's mother, who is Catholic, is really Jewish, given to some French nuns for safety as a baby in 1941 when the Nazi's were occupying France and her parents were about to be arrested and sent to a concentration camp. Link, who up until now hadn't taken the swastikas seriously, is stunned by this news. If his great grandmother was Jewish, his grandmother is Jewish, that means he and his mother are technically Jewish, too. When Link begins to annoy Dana with question about Judaism, she suggests he get bar mitzvahed. Which he decides is a great idea and arranges lessons with the closest rabbi 100 miles away.

Meanwhile, it doesn't take long for a TikTok vlogger named ReelTok to latch on to the events in Chokecherry and start broadcasting right in the middle of town, hoping to stir things up. When ist becomes clear that the students are getting nothing out of the tolerance education they are being given, it's clear they need to do something else to counter the swastikas that are still showing up. Following the lead by the real school that collected 6 million paper clips, one for each Jewish person who perished in the Holocaust, the students at Chokecherry Middle School decide to make a paper chain with 6 million loops. It's an ambitious project and soon the whole school is behind it, gluing paper links together. But when they run out of construction paper in Chokecherry and the principal cancels the whole project, it feels like the person drawing the swastika's has won. But have they?

This is a Gordon Korman book so you know it is told from the perspective of different characters, with Link being at the center. It's not a format that always works, but Korman is a master at it and it work in his hands. It provides insight about each character, what they are thinking and how they are reacting to the events as they unfold, so it's very in-the-moment.

Linked is told with a lot of Korman humor despite the seriousness of the Holocaust. The fact that the students are bored and turned off to the tolerance education but enthusiastic about the paper chain points to the fact that participatory learning might be better. At least, as a teacher, I think so, especially as the Holocaust recedes and students see it as just another topic in history. To his credit, Korman includes a lot of Holocaust history in this novel in such a way that the students really get they idea of what it was like.

I loved how the theme of linking used. When you think about the novel, so many links come to mind. For example, Link's grandmother, who is still living, links past and present, while the fact that most people in Chokecherry think the racist Night of a Thousand Flames never happened links it to the importance of remembering those who perished in the Holocaust, signified by the loops of the paper chain. Other themes explored are identity, racism, redemption, community. Oh, yes, there is also a big surprise towards the end of the book.

This book is recommended for readers age 10+
This book was borrowed from the NYPL
Posted by Alex at 10:21 AM