Ghosts in the Fog: the Untold Story of Alaska’s WWII Invasion by Samantha Seiple 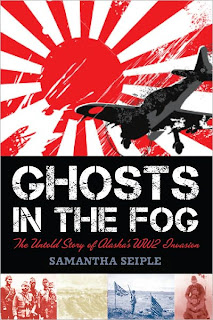 Ghosts in the Fog is the story of the Japanese invasion of the two of the Aleutian Islands, Attu and Kiska. The Japanese occupied these islands from June 3, 1942 to August 24, 1943. And, I have to be honest and confess that I did not know anything about this invasion of the Aleutians, and by extension the US, since these islands were US territory at the time, so I was really looking forward to reading Seiple's account of it and I was not disappointed.

Seiple begins the history of the Aleutian invasion by introducing the team of US Navy cryptographers who deciphered the messages from Admiral Yamamoto, commander of Japan’s Imperial Fleet, detailing his plan to simultaneously attack the Aleutian and Midway Islands, thereby opening the way for complete Japanese dominance in the Pacific. Unfortunately, Rear Admiral Robert Theobald of the US Navy decided Yamamoto’s messages were a trick and ignored them. Instead, he planned his counterattack 1,000 miles away from the Aleutians. This was a deadly decision for the residents who lived on the Aleutians.

On June 3, 1942, the Japanese began their attack at Dutch Harbor, the home of the Naval Operating Base and Fort Mears Military Base. Not finding what they wanted there, they moved on to the island of Kiska, invading it on June 6, 1942. The only occupants of the island at the time were a weather team of 10 men. Their job was top secret, since weather plays such a crucial role in war, often determining when an attack on the enemy would take place.

On June 7th, they invaded the island of Attu, rounding up the residents, all 44 of them, and forcing them all into the schoolhouse. Not allowed to speak to each other, they were given a sheet of rules of occupation. After being held all day with nothing to eat, the Attuans were allowed to return to their now looted and shot up homes. Attuans were held prisoners in their homes until September, when they were sent to labor camps in Japan.

It took 15 months for the United States military to regain the islands of Kiska and Attu.

Ghosts in the Fog is a nice, comprehensive accounting of the Aleutian invasion. Seiple has clearly researched her topic thoroughly and utilizes it well. Included in the book are lots of photos and a map to help the reader situate where things happened, important since not many people know about this event of World War II.

I found the book informative, but I also found myself looking up things that were not made clear enough in the book. Each chapter starts of focused on an individual who was there, giving it a more personal touch. All their experiences are then pulled together in the final chapter, leaving no loose ends.  Most salient in Seiple’s descriptions, and not very different from each other in their levels of harshness, are the somewhat graphically presented cruelty of the Japanese soldiers and the very graphic depiction of Aleutian weather. And much of this story is about surviving these two enemies.

On the whole, I found this to be a compelling book, in part because of the personal stories, and would definitely recommend it to anyone with an interest in non-fiction works about the Second World War.

This book is recommended for readers age 14 and up.
This book is an ARC that was sent to me by the publisher.

To read an except from Ghosts in the Fog, view the government documentary of the Aleutian Invasion or to see a senior editor talk about the book, please visit Samantha Seiple

Because I read an ARC, I did  not have the map included in the book to refer to (and I did refer to a map often.)  I am including a copy of the map I used here: 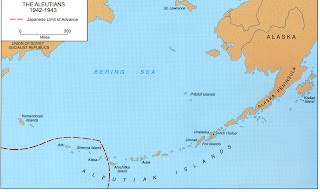 Non-Fiction Monday is hosted this week by 100 Scope Notes