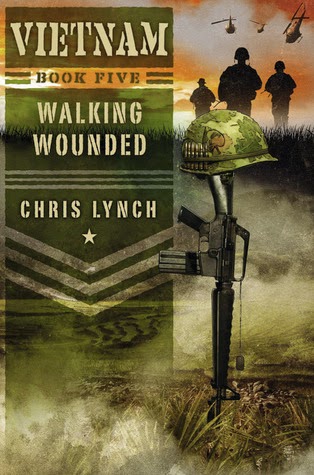 Morris, Beck, Ivan and Rudi have been friends since forever, so when Rudi was drafted, Morris convinced the others join up and go to Vietnam together, thinking they could watch out for each other by joining a different branch of the Armed Forces.  Each of the previous four books in the series focuses on one of the friends.

Now, in Walking Wounded, Rudi has been killed by friendly fire, apparently, the friendliest fire of all, and this novel follows each man's reaction to their friend's death.

Morris, whose idea it was for them to all join up, is feeling terrible guilt about having convinced them to do that.  He immediately requests and is granted the job of escorting Rudi's body home.  There is a lot of introspection during the trip.  But once home, Morris has some difficulty being there, in part because he knows the truth about Rudi's death and in part because the adjustment to suddenly being in a civilian setting is difficult for combat soldiers.  This was especially true for Vietnam soldiers, who had to face protesters, as Morris does while home, who held them responsible for the war that they were against.  Morris is still in the Navy and, though he is now stateside for his remaining tour of duty, his request for how he would like to spend that time may surprise readers, but when I think about it, I realized it would be a healing process for him.

Beck, the smartest one of the bunch, joined the Air Force, flying a C-123 aircraft, defoliating the forests of Vietnam with Agent Orange.  Beck is struggling to keep things together for himself, even as he is almost overwhelmed by the loss of his friend and by the realization that he is fighting a senseless war.

Ivan is an Army trained sharpshooter, who seems to just appear on different missions in this book, until he finally is shot in the face.  Sent stateside, on a first class plane, Ivan decides to take off once he reaches the states and hitchhikes the rest of the way home.  Despite winning medals, Ivan is having a great deal of difficulty with his Vietnam experience and with Rudi's death and takes off for the family's hunting cabin to be alone.

I have only read one other book by Chris Lynch, a WWII novel, but I will say that he does know how to write a war book for middle grade readers.  There is enough fighting with the enemy and among the American soldiers themselves to make it feel realistic with being too graphic.  The language is a little cleaner than I would have imagined it was in reality, but that's OK.

I don't usually read the fifth book in a series if I haven't read the previous four, but I did this time.  I found I didn't have much problem figuring things out.  The novel is narrated in the first person by all four of the friends in alternating chapters, so we get the full effect of their reaction to Rudi's death and to the war in general.  I was a little taken aback by Lynch still giving Rudi a voice, but in the end, it worked.

I thought Lynch really captured the disorientation, confusion, and anger that accompanied so many Vietnam soldiers as they fought a war they didn't fully understand and returned to a hostile homeland. Morris and Ivan are clearly beginning to experience the emotion toll of the Vietnam war and the disenfranchised feeling so many felt after the war.

As war books go, that is books that actually take place in the midst of the fighting, this is an excellent novel.  I remember feeling the same way about the first Chris Lynch book I read, The Right Fight.

Everyone thought that Book 4: Casualties of War was the last book in the series, but then Walking Wounded appeared.  Is this the last book?  Don't count on it.  There are still too many lose ends, beginning with what happened to Beck.

This is my Vietnam War book for my 2014 War Challenge with a Twist hosted by War Through the Generations.
Posted by Alex at 11:06 AM