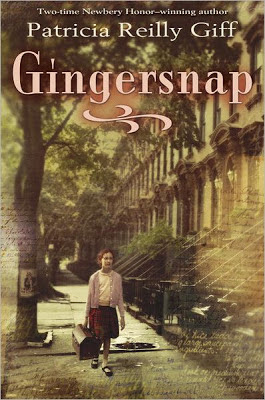 It is 1944 and Jayna's big brother Rob, the only family she has, is a cook in the Navy.  Jayna and Rob were separated for years, placed in separate foster homes after the automobile deaths of their parents.  But when Rob turned 18, he got custody of Jayna.  Only now Rob has received his orders to report to his ship for deployment to the war in the Pacific.  Rob have made arrangements for Jayna to stay with thier landlady Celine for the time he is away.

Rob may be a great cook, but Jayna has a way with making homemade soup that even he can beat.  Could this be a family talent?  The night before he leaves, Rob tells Jayna he found a small blue recipe book with a name and an address in Brooklyn.

When a dreaded telegram arrives with news that Rob is missing in action, Jayna decides to find the recipe book.  Inside, there is a picture of a woman standing in from of a shop called Gingersnap, the same name her mother used called her, or so Rob claimed.  Jayna didn't remember her parents, who were killed in a car accident when she was very young.  Unhappy at Celine's and feeling very alone in the world, Jayna packs up a few things, including Theresa, the turtle she takes care of, and set off early one morning to find what she hopes might be an unknown grandmother named Elise.

Accompanying her on the trip to Brooklyn is a ghostly presence, or at least part of one, who wears Jayna's pink nail polish and can read her thoughts.  But she wasn't much help when Jayna takes the wrong train and ends up in Coney Island.  Leaving Theresa and her suitcase on the boardwalk, she goes down to the water's edge.  And naturally, the suitcase with the recipe book is stolen.  But Jayna remembers the address and, in distress, take the train to find the store with the name Gingersnap.

Yes, it is exactly where it was supposed to be.  And there is a kindly looking elderly lady behind the counter.  Mustering up her courage and encouraged by her ghost, Jayna walks into the store and no sooner is she standing in front of the lady when she knocks a wedding cake of the counter.

Ready to give up, Jayna runs out the store's back door and hides in the overgrown garden there, falling asleep. When she wakes up, she is hungry, miserable and stiff.  To make matters worse, now Theresa is missing.   But, seeing Elise in the back of the store making some dinner,  Jayna shores up her courage and knocks on the door.

Will this kind lady be her grandmother?  At last, a family member and a tie to her unknown parents?
Maybe, maybe not.

You can't go wrong when you pick up a book by Patricia Reilly Giff to read and Gingersnap is not exception.  The plot may be a little predictable, but the characters are believable and basically kind and caring, which is always nice to see in a novel.  WWII was a chaotic time and all kinds of things happened that caused children to become orphans, so it was nice to see Jayna's desire and determination to be part of a family.

I loved reading reading all the little details Giff included in Gingersnap, and especially about my hometown Brooklyn in the war.  The lackadaisical attitudes about school and Elises's difficulties running a bakery with all the shortages due to rationing are the kinds of real life details that go into making good historical fiction.

My very favorite part of the book is Jayna's soup recipes that are scattered throughout.  Depending on what is going on in her life, Jayna prepares soups like "Don't Think About it Soup" or "Feel Better Vegetable Soup."

And about that ghost - when you read Gingersnap I think you will agree that this is not really a true blue ghost story and there is a perfectly reasonable explanation for her presence.

This is a great book about food, family, hope and courage, and whether you are or are not a Patricia Reilly Giff fan, one you will want to read.