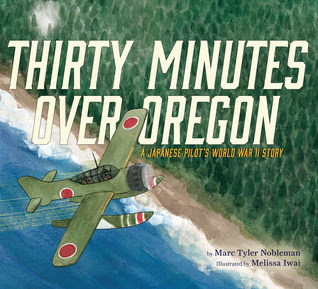 I first heard about Thirty Minutes Over Oregon way back in 2011, when I did a post for Marc Tyler Nobleman about the possibility of getting it published. His post, Picture Book for Sale, is still online and quite interesting to read, in case you are interested.

Thirty Minutes Over Oregon begins September 1942, less than a year after the bombing of Pearl Harbor, when a Japanese pilot named Nobuo Fujita flew a small plane that had been catapulted from a submarine in the Pacific Ocean over to Oregon. The goal was to drop two 168 pound bombs into the Oregon woods to start a fire that would burn the woods and any nearby towns and cities. The mission was so hush-hush, not even Nobuo's wife could know about it.

The bombs didn't start much of a fire, but imagine how the people in Brookings, Oregon felt when they realized that a Japanese plane has entered American airspace right over their heads. And twenty days later, Nobuo again flew into American airspace, in the same plane carrying two bombs. Though nothing came of this second attempt either, the Japanese still claimed victory.

The war ended in 1945 with the US bombing of Japan. Lucky for Nobuo who had been ordered to make a kamikaze attack on an American warship. Instead, he returned home and opened a hardware store.

Fast forward to 1962. The people of Brookings decided to track down and invite Nobuo Fujita as their Memorial Day guest of honor and thinking it would be a wonderful symbol of reconciliation between American and Japan. Not everyone in the US thought it was a good idea, but to everyone's surprise, Nobuo accepted the invitation, not without some fear and reservation, however. Was it a trick, would he be arrested and tried as a war criminal?

The 1962 visit showed the positive value of reaching out to a former enemy in peace. Nobuo was a friendly, respectful man, who had lived with the guilt of his attempted bombings of Brookings. His initial visit there began a lasting relationship between Nobuo and the people of Brookings, including an invitation extended to three high school students to visit Japan at his expense. Nobuo also donated large amounts of money for a town library for children's books. After he died in 1997, some of Nobuo's ashes were also scattered in the area where he had dropped his bombs.

As always, Nobleman has done his research on the only enemy bombing with the United States during WWII. And he has taken that research and written an compelling and emotional work of nonfiction. His text is simple and clear, and complimented by Melissa Iwai's beautifully rendered watercolor and mixed-media illustrations. Iwai has captured the gentle humanity of both the citizens of Brookings and of Nobuo and his family.

The message for us to take away from this little known WWII event and its aftermath is that a soldier is doing his job even if he is the enemy. What is important is how we reconcile after a war in order to heal and move on. That is the important legacy that Nobuo and the people of Brookings have demonstrated and that Nobleman has so poignantly captured in this picture book for older readers.

This book is recommended for readers age 7+
This book was borrowed from a friend
Posted by Alex at 3:37 PM