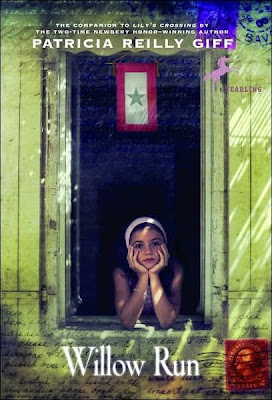 It is the summer of 1944 in Rockaway, New York and twelve year old Meggie Dillon's older brother Eddie is in the army and fighting somewhere in Europe.   Meggie spends much of her time doing things with her German-born Grandpa, even though he sometimes annoys with her by always calling her Margaret, not Meggie and when he always gets the letters V and W mixed up when he speaks, plus he always talks during a movie.

So when her parents tell Meggie they will be temporarily moving ("for the duration")  to a place called Willow Run, far from Rockaway, so her father can build B-24's for the war effort, she is somewhat relived to find out that Grandpa won't be coming along.  She had just caught two boys painting a red swastika on Grandpa's window, calling him a Nazi spy and telling Meggie that if he lived anywhere else but Rockaway something terrible would probably happen to him.  Worried, she rubbed the swastika off with a rag and turpentine so her Grandpa wouldn't see it.

No sooner does the Dillon family arrive in Willow Run, Michigan than Meggie begins to miss home - tending the garden with Grandpa, her best friend Lily, the sound and smell of the ocean right outside her door.  But Meggie soon makes friends with Patches from Tennessee, Harlan from Detroit and Arnold, the ice cream guy who Harlan thinks is a German spy and from whom the kids figure out how to steal ice cream when he locks up his truck.

But then comes the news that Eddie is missing in action after the Normandy invasion and the Dillon's world seems to collapse.   In the midst of all their sorrow, Meggie receives a package from Grandpa containing his most cherished possession - his Victory medal from World War I.   As Meggie begins to learn the truth about Patches' life before Willow Run and Arnold's demons, and witnesses her parents grief over Eddie as well has her own, she begins to understand what is most important in the world and hatches a plan to help herself and her parents.

Patricia Reilly Giff continues the story of Meggie and Lilly in Willow Run that she began in Lilly's Crossing, which I probably should have read first, but didn't.  Yet, somehow I don't think that will really matter in the long run, however since Lilly plays a very minor role in Willow Run, which is definitely a stand alone novel.

Meggie is an engaging down-to-earth narrator in this quiet coming of age novel.   When Eddie had joined the army, he told Meggie now she was an only child, no longer the baby.   And when she left Rockaway, she was indeed still quite immature.  But it is her experiences in Willow Run and having to deal with such different new realities and events that turn Eddie's word into truth.

The reality of war was a part of home front life for many kids during WWII and in Willow Run, Giff has given us a different version of that life by taking Meggie out of her familiar circumstances and placing her in a place place created specifically for the war, where she can meet other people from circumstances very different from her own.  It is a situation where people become friends quickly and help each other out, understanding that they are all in the same boat with shared fears, hopes and dreams.

And Giff has captured some wonderful bits of home front life, like the rag curlers worn by a neighbor, the contests for things life Hot-O-Soup that Meggie and Grandpa are constantly entering, Meggie's vow to never eat Spam again after the war (my mom made the same vow and never did eat it again).  All serve to give this well-written, thoughtful work of historical fiction a sense of authenticity.

Willow Run, Michigan was an actual place, a village and plant for making B-24 bombers, built by Henry Ford during the war.  The housing was slapped together quickly and was exactly as Meggie describes:


A kindergarten kid could have drawn it: a long low box that stretched from one end of the paper to the other, no paint, no color.  And if you divided the box into tiny sections, each family would have one to live in.  Worst of all, there was no grass, nothing growing, only tree stumps...  (pg33)

The plant where the bombers were built is described as a mile long, and as you can see here, it needed to be that long:

If you visit Willow Run Village, you can see pictures and read about peoples experiences living in Willow Run.  Many of the photos show exactly what Meggie describes in the novel Willow Run.
Posted by Alex at 8:39 AM