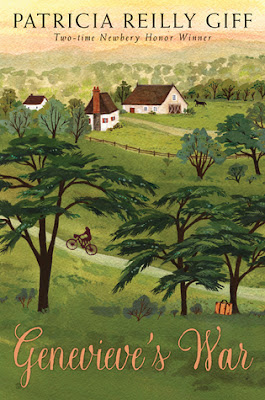 French American Genevieve Michel, 13, and her older brother André have been spending the summer of 1939 visiting their rather cold, judgmental grandmother, Mémé, helping out on her farm in Alsace, close to the Germany border.

Now, at the end of summer, André has already returned to the States and Genevieve is set to leave on the Normandie, on what may well have been the last passenger ship leaving France before the expected invasion of France by Germany. But at the last minute, Genevieve decides to remain with her grandmother. In September 1939, war is declared, and in June 1940, the Germans do indeed invade France.

Suddenly, everything changes. There are German soldiers everywhere and everyone’s farm animals and food supplies are confiscated by them. Luckily, Mémé has a secret pantry where she and Genevieve move most of their jars of food. The teacher at school is replaced by a new Nazi teachers, the French names of the students are changed to German names (Genevieve becomes Gerta), and French is outlawed, only German may be spoken at all times. French books are publicly burned, and a German officer is billeted on the farm, enjoying what little food there is, and complaining about the scarce heat.

Genevieve believes her brother has safely returned to the United States, but when she notices a sweater of his at the village book shop, she becomes suspicious of the owner, Monsieur Philippe, and decides he is not to be trusted, even though Mémé tells her she is wrong. But when the train station is sabotaged, and Genevieve learns that Rémy, a boy she likes very much, is a Resistance fighter and missing since the station was blown up, she has to turn to the bookseller for help. Can she really trust him?

Soon, she finds herself hiding Rémy from the Nazis in Mémé attic. Genevieve and even her grandmother becomes part of the local Resistance, doing what they can. Mémé has always told her granddaughter not to trust anyone, not even her best friend Katrin, but Genevieve’s a naïve, impulsive girl who always thinks she knows better. And Genevieve has to learn the hard way that people are often not who they seem to be, and friends may betray friends, while perceived enemies may turn out to be friends after all.

Until now, I have only read two of Giff’s WWII books, both of which take place on the home front, so this was a change for me. But just as she did in Willow Run and Gingersnap, Giff managed captured what life was like - this time in an occupied country. All the realities of war are there: the constant fear, the constant hunger, the winter cold, the always present mistrust, and especially the presence of an enemy who will not hesitate to use their force or weapons to get what they want. And although Genevieve constantly thinks about what life would be like in Springfield Gardens, Queens if she had gone home, to her credit, she never regrets her choice to stay with her grandmother in Alsace.


Genevieve's War is told in the first person, narrated by Genevieve so everything is filtered through her experiences. I especially liked seeing her opinion with her grandmother changed over time, as well as how Mémé's judgement of her granddaughter changed. Over the course of the war, Genevieve transforms into a capable, thoughtful young woman who comes to appreciate her grandmother, learns about her deceased father whom she never knew, and discovers a love for farm life.


Genevieve's War is a thought-provoking novel that explores the themes of courage, defiance, and loyalty in times of peril that still manages to carry a note of hope throughout.

An Educator's Guide for Genevieve's War is available to download from the publisher, Holiday House.

This book is recommended for readers age 9+
This book was an ARC received from the publisher.
Posted by Alex at 8:23 AM