Resist: One Girl's Fight Back Against the Nazis by Tom Palmer 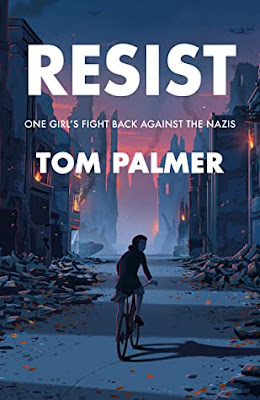 A few years ago, I read a book called Dutch Girl: Audrey Hepburn and World War II by Robert Matzen, so I knew about her experiences during the war. What I didn't know when I started reading Resist, the new WWII book by Tom Palmer, was that it is a fictionalized story inspired by Audrey's life during the war.

It's 1943, and Edda, 15, has a sheaf of illegal resistance newsletters stuffed inside her socks to be delivered to certain addresses. The delivery is her first her first resistance assignment and Edda is nervous, knowing if she were caught, it would mean death at the hands of the Nazis. Edda volunteers at the hospital, and had  asked Dr. Hendrik Visser't Hooft, a leading figure in the resistance, if she could help there, too. Years of studying ballet in England had given Edda an excellent memory, and she proved herself able to easily memorize the addresses for the newsletter delivery.

The Nazis had been occupying the Netherlands since 1940, forcing Edda's brother Alex to go into hiding to avoid being picked up by the Nazis and sent to a slave labor camp in Germany, and her Uncle Otto was one of 460 men who had been arrested and executed by the Nazis. So imagine Edda's stunned surprise when she sees her mother's name listed as a Nazi sympathiser in the newsletters she's carrying. How could Edda possible prove that her mother wasn't a collaborator?

When Dr. Visser't Hooft asked Edda if she would be interested in dancing as part of an evening of entertainment, a secret performance done after dark, to raise money to help people in hiding. she thinks this would help prove her mother's support for the resistance. But when she asks her mother's permission, Edda was told no, she could not participate, it is just too dangerous. After the Germans pick up her other brother Ian, 17, to send to Germany, Edda's mother has a change of heart and gives her permission to perform. On the way home from the performance, Edda finally asks her mother why she had been listed as someone not to be trusted and is relieved to learn that her mother feels it was a mistake to support Hitler and is now on the side of the resistance.

By 1944, the Dutch are hearing on illegal radios that the Allies are moving closer to Holland. But the Germans are getting desperate and are stealing most of the food for themselves and letting the Dutch starve. When the British finally arrive not far from Velp, everyone begins to hope the war will end for them soon. But the British are defeated, as is the hope of the Dutch. Then, one day, Edda is caught by German soldiers along with other girls her age. Afraid she would be sent to Germany like her brother Ian, Edda takes a chance and runs away, knowing how to avoid the soldiers because her resistance activity had taught her all she needed to know about the streets of Velp.

When her mother hears what happened, Edda is sent to the cellar for her own safety with the rest of her family as the war continues above them. Early one morning, there's a knock on their front door,  and after her mother and grandfather go see who it is, they return with a box of food, apparently from the American army. Could it be that the war and the Nazi occupation in the Netherlands is finally coming to an end? And will Edda ever see her brother Ian again?

Resist is an interesting story, in part because I knew it was inspired by Audrey Hepburn's family and her resistance work. More importantly, however, Palmer shows his readers, without being too graphic, just what it was like for the Dutch people under Nazi occupation - the cruelty of the Nazi soldiers, the disregard for the lives of the Dutch people, and the extent of the starvation they were subjected to. 1944 was infamously known as the Hunger Winter. And just as importantly, the strength of the Dutch during that time. At one point, Edda, already an accomplished dancer, even gave ballet lessons to the local children.

Palmer's portrayal of Edda is sensitive and I think true to who the real Audrey Hepburn was. He has brilliantly captured her thoughts, her fears for herself and her family, her anger at the Nazis for what they have done to her beloved country, friends and neighbors, and her need to resist the occupiers. These are the same qualities that followed Audrey Hepburn throughout her life, and lead her to do so much humanitarian work as well as acting.

Resist is published by Barrington Stoke known for their books that are adapted for dyslexic and reluctant readers. and as a dyslexic, I can't recommend them highly enough.