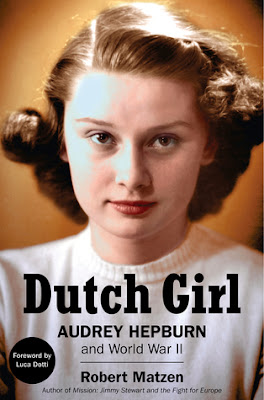 I spent a lot of afternoons watching movies with my best friend growing up, and one of our favorite screen stars was Audrey Hepburn. I can't count the number of times we saw Roman Holiday, Charade, and Breakfast at Tiffany's? Audrey Hepburn was the quintessential Holly Golightly. So when I saw that a book about her life during World War II had been written, I was really excited to read it, especially when I realized I knew nothing about Audrey Hepburn's off-screen life.

Robert Matzen has written a biography that focuses mainly on Audrey Hepburn life during the Second World War when she was living under Nazi occupation in Holland, with her Dutch family on her mother's side. Hepburn was only 11 years old when the Nazis invaded, and it would understandably have a deep impact on her. In fact, all through her adult life, Audrey was haunted by what much of what she witnessed and experienced during WWII.

Audrey was born in 1929 to a Dutch mother, Ella, Baroness van Heemstra and a German/English father, Joseph Ruston, but money problems soon meant Ruston would be gone a largely absent father. Audrey, her mother, and two stepbrothers, Alex and Ian, found themselves living in Arnhem with her Opa, Baron van Heemstra and his wife. Then, in the early 1930s, both Joseph and Ella fell under the influence of Sir Oswald Mosley, head of the British Union of Fascists, and both parents became strong supporters of Hitler. In fact, Ella wrote two published articles in support of National Socialism, she even attended the 1935 Nuremberg rally, and is present in a photo with Hitler and others at Nazi headquarters in Munich.

But after the Nazis defeated the Dutch in 1940 and began occupying Holland, life changed for everyone. With her country under siege, and life getting more and more difficult, Audrey threw herself into ballet. She had begun ballet while in school in London, and it remained her greatest passion throughout her life. Though her first performances as a ballerina were for German audiences, Audrey later used her increasing dance skill to raise money for the Dutch Resistance, evenings referred to as zwarte avonden or black evenings. She spent much of her time volunteering for Dr. Visser't Hooft, a leader in the Dutch Resistance, at his hospital It was he who encouraged her dancing in service of the resistance.

But Audrey's life during WWII wasn't all about dance. She took the death of her beloved Uncle Otto van Limburg Stirum, executed by firing squad with four other men in retaliation for resistance activities, very hard. Witnessing the Nazi's cruel treatment of Dutch Jews, and later their mass deportation was also seared in her memory. But it was the deprivation and starvation of the last year of the war, the Hunger Winter, that seems to have had the greatest impact on Audrey physically as well as mentally and influenced her relationship with food for the rest of her life, and perhaps even her decision to serve as a representative for UNICEF, the United Nations organization that provides world-wide emergency food and healthcare to children.

Matzen has written an intense, exciting biography of Audrey Hepburn. Interestingly, he has interspersed chapters about her later life as it relates to WWII. It appears that Audrey never quite reconciled her parents support of Hitler and National Socialism, but there was an unspoken agreement between mother and daughter to never speak of it in public, though she lived in fear that it would be discovered.

But Dutch Girl is more than just Audrey Hepburn's wartime experience. It is a very well-researched  history of World War II, as it relates to the Netherlands. Holland was a peace-loving country that was traumatized by constant dogfights in the air between Allied and German pilots, heavy bombing and towards the end of the war, the particularly destructive V1 and V2 bombs meant for England but landing in Holland when they malfunctioned. And although Hitler thought the Dutch were Germany's Aryan cousins, as things intensified, they were treated with more and more cruelty.

On a personal note, I found Dutch Girl to be especially valuable because of my interest in the impact of war on children, part of the reason I began this blog in the first place. I was really glad Matzen included the chapters about Audrey Hepburn's life after the war, often quoting her. I could see the impact of WWII on her young life in a way that fiction often doesn't provide. It is very well written and organized, and I found I could not put this book down once I began reading it.

Dutch Girl is, I think, a book that will appeal to people interested in WWII history, more so that those who simply might be looking for a book about the glamorous life of a movie star.

This book is recommended for readers age 17+
This book was provided to me for purposes of review.