Agent Most Wanted: The Never-Before-Told Story of the Most Dangerous Spy of World War II by Sonia Purnell 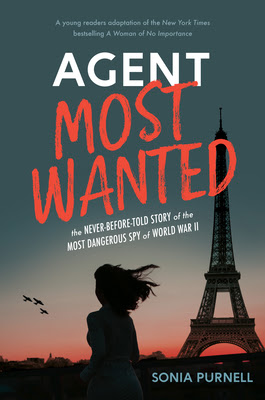 Virginia Hall may have been born into a family that believed they were obligated "to restore the family to the heights of Baltimore society" but she had no intention of obliging her mother's wish of marrying into money. Virginia was too free spirited to settle down into a society marriage. She loved excitement and living in NY while attending to Barnard College provided her with plenty of that. Virginia was also able to go to Paris when she  was 20, enjoying the art, literature, and meeting all kinds of interesting people, and travelling around Europe for several years.

When Virginia returned home in 1929, she immediately applied for at job at the State Department, hoping for a diplomat position. Despite stellar qualifications, the State Department rejected her application, but she did get a not-terribly-interesting post, first in Warsaw, Poland and later in Smyrna, Turkey, both at the U.S. Embassies. While in Turkey, she had a shooting accident and lost her left leg below the knee as a result.

Undeterred, and despite an uncomfortable prosthetic leg, Virginia was determined to return to Europe, and got another posting with the US Consulate in Venice, Italy. But with fascism on the rise in Europe, in 1936, Virginia again applied for a position as a diplomat. This time, with the help of President Roosevelt, she finally found herself as part of the US legation in Tallinn, Estonia in 1938. But after a year of secretarial work, Virginia resigned. When Hitler invaded Poland in 1939, she planned on going to London, but instead ended up in Paris, where she signed up as an ambulance driver with the French Ninth Artillery Regiment.

A chance meeting with someone who was impressed with her courage and who had connections, led Virginia to Nicolas Bodington, senior office in the French section of Britain' s newly formed Special Operations Executive. After some hesitation, Virginia was off to learn the basics she would need to become an effective intelligence agent for the British in France. When she arrived in southern  France, she registered at an American correspondent with the Vichy government.

Despite the pain caused by her artificial leg, the danger of being a spy, and being isolated in a hostile environment, Virginia Hall managed to accomplish amazing things for the duration of the war. Once she arrived in Vichy, France, Purnell meticulously documents Virginia's resistance work, both her successes and her failures, answering the question: How did Virginia Hall became the agent most wanted and why the German Gestapo considered her to be the most dangerous woman in Europe during WWII?

Though nonfiction, the history of Virginia Hall's life during WWII reads like a thrilling novel, full of dangerous adventures and frustrations befitting the life of a spy. Virginia's is a story that has been relatively untold up to now. Purnell, in this biographical work, shows how Virginia was continuously belittled, often rejected, and discriminated against because of her disability, yet she never gave up pursuing her dreams, and how, despite everything, she may have been one of the best spies in WWII.

This is a book that will appeal to young readers who are history and WWII buffs. Back matter includes Chapter Notes and a select Bibliography. Agent Most Wanted is a young readers adaptation of Purnell's original book A Woman of No Importance