My Brother’s Shadow by Monika Schröder 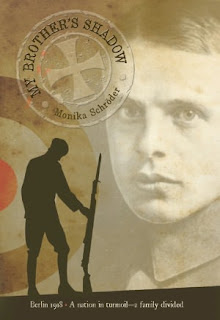 My Brother’s Shadow is a realistic look at life on the home front in Berlin just as World War I is coming to a close and Germany is about to surrender, a time and place not usually explored in young adult fiction.

Moritz Schmidt, 16, lives in a small apartment with his mother Anna Schmidt, sister Hedwig and grandmother.  His older brother Hans is off fighting in the trenches at the Western Front, where his father has already been killed.  And a little sister has also died relatively recently. Moritz works in the newspaper printing room of the Berliner Daily and has made friends with a journalist who takes him to an illegal meeting of Social Democrats.  These are revolutionaries advocating the abdication of the Kaiser and demanding that become a democratic country once the war has ended.  It is at this meeting that Moritz discovers his mother is a much respected speaker and member of the Social Democrats.

After 4 years of war, life is very hard for most of the people of .  They must stand in long lines to get what little food is available; there is little fuel to heat their homes.  But once Moritz is initiated into his brother’s old gang, he learns that their activities consist mainly in breaking in and stealing the ample food supplies of the rich, an undertaking not much to his liking.

When the family receives news that Hans has been seriously injured at the front, Moritz takes the train to the field hospital in -.  On the train, he meets a friendly young Jewish girl, named Rebecca, who gives him a book she has been reading.  Later, he meets her again at another illegal Social Democrat meeting and discovers she too supports the revolutionary ideas of both his mother and sister.

When Hans comes home, missing an eye and an arm, he is enraged at his mother’s activities, his brother’s budding romance with Rebecca and Moritz’s attitude towards his old gang.  It causes a schism in the household, with Hans taking the side of the Kaiser’s , and feeling that people like his mother have betrayed the soldiers fighting for and advocating a revolution in .  Moritz stands in the middle – caught in the kind of patriotic feelings the sent so many to war in the first place, yet seeing that change needs to happen.  The Schmidt family, then, becomes a microcosm of exactly what is happening throughout at the end of the war.

Schröder has done an excellent job in researching and representing the time and events she is writing about.  One of the things that Hitler blamed the loss of the war on was the supposed lack of support by the home front and the readers sees this attitude reflected in Hans’s reactions to things after he come home.  Hans also feels the same kind of virulent anti-Semitism that propelled Hitler’s later policies.  These feelings are portrayed with such intensity that I knew it would only a matter of a few years before Hans would have been a member of the fledging Nazi party, as did so many of his real life counterparts.

I thought that Schröder also captured the passion and fearlessness of the revolutionaries just as strongly. Important names like Rosa Luxemburg and Karl Liebknecht, radical left wing members of the revolution and Friedrich Ebert, a conservative Social Democrat, appear in the story, and I really liked that she has even included the important Sailor’s Revolt in . Given this background information, the reader most clearly can see the contrast between Hans and his mother, making this very thought provoking aspect to the story.  Mixed into all this is Moritz, an naïve young man with a strong sense of right and wrong, but at least in the beginning no political commitment.

I found my thought returning to this novel long after I had finished it, which to my mind make My Brother’s Shadow is an example of historical fiction at its finest – a seamless blending of fact and fiction to create a story the in entertaining and informative, and one I can highly recommend to both YA and adult readers.

Email ThisBlogThis!Share to TwitterShare to FacebookShare to Pinterest
Labels: Germany, World War I, YA