Weekend Cooking #28: When a war ends...or how I discovered the best peach cobbler ever

Most of us probably like to think that when a war ends the survivors go home and pick up their lives where they left off.  But of course, deep down we know that isn't how it happens. Soldiers come home wounded and often suffering from PTSD, families are torn apart, children are displaced and everyone must still deal with all kinds of loss, and, as you saw in The Seagoing Cowboy, people living in ravaged countries are starving. 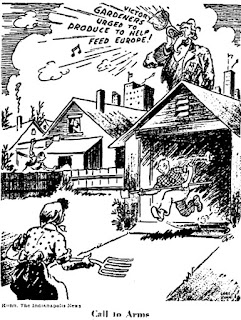 After World War II ended, Americans were asked to revive their Victory and Community Gardens in order to help meet the needs of a post-war Europe and Asia.  As Henry Wallace told the National Victory Garden Conference in 1946 "...probably more persons will go hungry during the next four months than in any like period in the world's history."  By then, most Victory Gardens were no longer being used so the 18,500,000 gardeners who has gardened for war were a little surprised when the call went to for them to now garden for peace.   Did Americans rise to the challenge?  You bet they did.


Besides asking Americans to revive their Victory Gardens, President Truman also called for the production of Emergency Flour.  The idea was to conserve wheat making more of it available to Europe.  What that meant was that all-purpose flour would now contain more bran and wheat germ, both of which are normally not found in flour.  Because Emergency Flour didn't behave the same way all-purpose flour did when used for baking, companies began to put out recipes that were tailored to it: 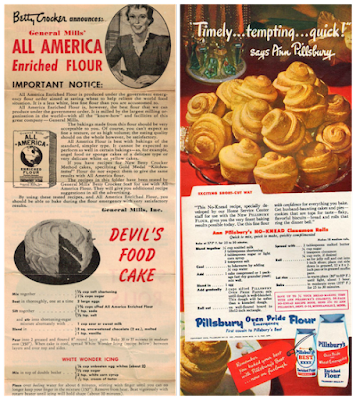 I've tried these two recipes, though not with Emergency Flour, and they were OK, but my favorite, my absolute favorite is the 1946 Better Homes and Gardens recipe for Crusty Peach Cobbler.  I love Peach Cobbler so much, I started canning my own peaches so I could have it year round.  I found the recipe over at a blog I read called Retro Recipe Attempts and I have been using it ever since. 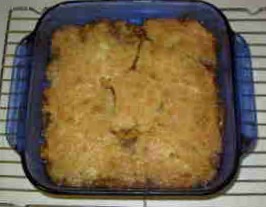 As you can see, it has a nice thick biscuity or crusty top layer, which I really love.

Instructions
Preheat the oven to 400º.  Arrange the fruit in a greased shallow 9-by-13-inch rectangular baking dish or 10- to 12-inch oval ceramic gratin dish. Toss with the sugar, zest, lemon juice, and almond extract.
Place the fruit in the hot oven 10 minutes while preparing the shortcake.

Combine the flour, salt, baking powder, and sugar in a medium mixing bowl.  Cut in the cold butter with a fork or electric mixer until the mixture resembles coarse meal.  Make a well in the center and add the milk and egg, mixing until just evenly moistened; do not over mix (I use a Danish dough whisk, one of my favorite tools, for this).  Working quickly, drop the dough by large tablespoons over the hot peaches so that the edges do not touch the sides of the dish and sprinkle the top with the remaining 2 tablespoons of sugar.

Immediately return to oven and bake 25 to 30 minutes, until the topping is golden brown and firm to the touch. Cool at least 15 minutes to serve hot, or cool to room temperature and reheat to warm. 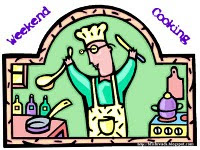 Weekend Cooking is open to anyone who has any kind of food-related post to share: Book (novel, nonfiction) reviews, cookbook reviews, movie reviews, recipes, random thoughts, gadgets, fabulous quotations, photographs. If your post is even vaguely foodie, feel free to grab the button and link up anytime over the weekend. As always Weekend Cooking is hosted by Beth Fish Reads
Posted by Alex at 1:00 AM