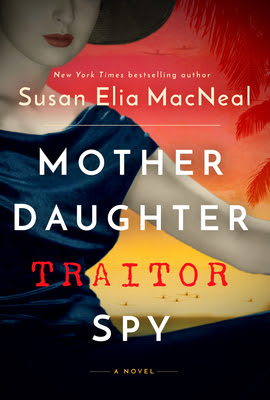 Mother Daughter Traitor Spy is a home front novel like no other home front novel I've ever read. It begins in 1940 on such a high note as Veronica Grace, aspiring journalist, is graduating from Hunter College (my alma mater) and about to begin working as a guest editor for Mademoiselle magazine after winning their annual competition.

But all that comes to a crashing end when Mademoiselle's editor in chief calls on graduation night and tells Veronica will not be welcomed as their guest editor after learning about an affair she had with a married man, who happened to be married to a woman, Mrs. Applebaum, whose father is a "titan of New York City publishing." In a call to Mrs. Applebaum, Veronica is told she will never get a job in publishing in New York City, and to just get out her the city.

When Veronica tells her mother and her Uncle Wally what happened, it is decided that she and her mother, Mrs. Violet "Vi" Engle Grace, would immediately leave NYC for Santa Monica, California. There, they could live in her uncle's summer cabin rent free.

Vi's husband had been in the Navy, but she's been widowed for the last 6 years earlier. She's an accomplished seamstress and embroiderer and has considered opening her own atelier. Her parents were both born in Germany and needless to say, both Veronica and Vi look like perfect Aryan woman.

It doesn't take long for the Grace women to be approached by some of the other woman of German descent, who wish to have Vi do some embroidery for them - swastika's and other Nazi symbols. Meanwhile, Veronica is having trouble getting a job in journalism and is referred to a Mr. Donald McDonnell who needs someone to take dictation and type. It turns out McDonnell and his wife Harriet produce a pro-Nazi tabloid and other Nazi propaganda. Veronica, who does not support the Nazis in any way, tries to report what she learns to the FBI, who don't seem very interested in Nazis, instead focusing on communists per instructions from J. Edgar Hoover.

Discouraged and annoyed at the FBI, Vi makes a call to one of her husband's colleagues in the Navy, Commander Ezra Zabner, to tell him what they suspect about their new acquaintances. Zabner is interested and introduces Vi and Veronica to Ari Lewis. Lewis, along with his friend Jonah Rose, are trying to learn what fifth columnists like McDonnell and his fellow Nazis are up to and they enlist Veronica and Vi to gain the confidence of these traitors,while they are in reality spying on them and reporting back to Ari and Jonah. A dangerous job for this mother and daughter? You bet, but it makes for some very exciting reading.

When I said that this book is a home front novel like no other, what I meant is that rather being a story  about fifth columnists and quislings, MacNeal takes the reader right into the heart of one such America First group to give them a clear picture of how those groups worked, their anti-Semitic beliefs, their efforts to keep America out of the war in Europe, and how they recruited more members through the connections that Veronica and Vi make once they get to California. Persuasion propaganda is an interest I developed as a student in Hunter College (thank you, Serafina Bathrick, "Propaganda and the Mass Media") and continue to have an interest in, so this novel was right up my alley. This is, to say the least, a well researched, well written novel that I found I couldn't put down.

Mother Daughter Traitor Spy is based on a real mother-daughter team, Sylvia and Grace Comfort, as are all the other main players, giving the story the in-depth sense of authenticity because so much of the Grace's undercover work and the content of America First's beliefs are taken from reality. Added to this is such a strong, almost cinematic sense of time and place, that I felt transported back to 1940s New York and California. MacNeal's use of fashion throughout adds even more flavor to the book's historicity.

I have to admit that I was a little disappointed when I first heard that MacNeal's next book was going to be a stand alone novel and not a Maggie Hope mystery, which I've been enjoying since Maggie first appeared. But Mother Daughter Traitor Spy has turned out to be a thrilling spy novel about two courageous women involved in some extraordinary work, and yes, there is some love interest, too. By the end, I found myself wondering if MacNeal would perhaps grace her fans a sequel to Veronica and Vi's story. Maybe?

Thank you, Katie Horn at Random House Group, for providing me with a copy of this novel to review.