Sergeant Billy: The True Story of the Goat Who Went to War by Mireille Messier, illustrated by Kass Reich 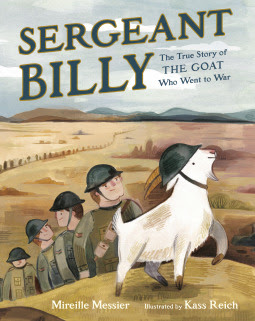 We are pretty familiar with the story about the bear cub named Winnie who was adopted by a lieutenant in WWI and whose story became Winnie-the-Pooh. And then there's Stubby, a stray dog who became the mascot of the 26th Infantry Division, went to war and became a decorated hero, as did Rags, a Parisian mongrel adopted by radio operator James Donovan. But did you know there was also a goat who was borrowed by some Canadian soldiers from a little girl named Daisy in Saskatchewan when their train made a stop there.

Daisy wasn't really happy to lend her goat to the soldiers of the Fifth Battalion who were going off to war, but they promised to bring him back, and so she agreed, and "that's how Billy's extraordinary story began."

And what a story it is. Private Billy proved to be an able soldier, training, marching, crawling and running like any other soldier, and even getting laggers back on track, not to mention being a great comfort and morale booster. But when it came time to ship out, the colonel said it was a no go for Private Billy. His fellow soldiers had other plans, though, buying an crate of oranges (which they quickly ate) and packing Private Billy into the empty crate to sneak him on to their ship. The plan worked and luckily, Private Billy was a good sailor.

Once at the front lines, Billy also adjusted well to trench life. Nothing bothered him - not the cold, not the mud, not the noise, not the bad food, not even the rats. He continued to be a great comfort and morale booster, especially to nervous new recruits and to homesick soldiers. Of course, Billy was a goat, after all, and he was known to occasionally chow down on some important secret documents, and sentenced to jail for spying. But when morale fell, he was quickly released. Billy also saved lives on the battlefield, butting soldiers back into the trench to avoid an exploding shell.

By the end of the war, Private Billy was promoted to Sergeant Billy, and awarded the Mons Star for bravery in the face of danger. And "that's how Sergeant Billy became a decorated war hero." Happily, Billy survived the war and was returned to a somewhat older Daisy in Saskatchewan.

War is an ugly business and it's a difficult topic to introduce kids to. Luckily, there are some excellent books that can help parents and teachers broach this subject with young readers. And Sergeant Billy would be a great choice with which to do that. I say this because the first thing that struck me about Sergeant Billy is how focused it is on the goat and not on the soldiers or some of the real horrors of war. In this way, the story offers a gentle introduction to war while at the same time it makes it very clear that war is not fun despite having a goat mascot.

Messier's writing is simple, direct, and age appropriate, though none of the technical terms are explained (for example, Billy got trench foot, but what is that? my young readers asked). And Reich's uncomplicated gouache illustrations in a palette of army browns and greens work in absolute harmony with the text.

Sergeant Billy and his life on the front lines while in the Canadian army is based on a true story, and readers will find plenty of informative back matter that includes photographs of the real Billy and information about animals in war. 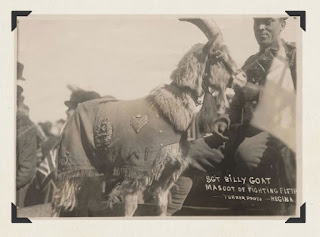 And for kids who really like heroic animal stories, pair Sergeant Billy with these other true stories from WWI: Fly, Cher Ami, Fly! The Pigeon Who Save the Lost Battalion by Robert Burleigh, Finding Winnie: The True Story of the World's Most Famous Bear by Lindsay Mattick, Winnie: The True Story of the Bear Who Inspired Winnie-the-Pooh by Sally M. Walker, Stubby the Dog Soldier, World War I Hero by Blake Hoena, Rags: Hero Dog of WWI, a true story by Margot Theis Raven, and Stubby: A True Story of Friendship by Michael Foreman