Voyages in the Underworld of Orpheus Black by Marcus Sedgwick, Julian Sedgwick, illustrated by Alexis Deacon 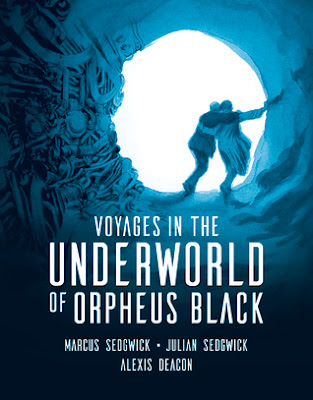 It's December 1944 and since September, the Nazis have once again been bombing London with their newest weapon, the V2 rocket. Harry Black, a conscientious objector, has been working on the fire brigade with fellow objectors. His moral position has caused a rift in the Black household. His father refuses to have anything to do him, claiming Harry has blackened the family name. Older brother Ellis is a soldier, back in London to recuperate from wounds suffered on the battlefield, and waiting to be sent back into combat. He also feels that Harry is a coward, but agrees to meet him at a pub called the White Horse. The two talk about a few things, including about a possible book of poems that Ellis could write and Harry could illustrate.

After talking for a while, Ellis decides to remain at the pub and Harry boards a bus home. The pub then takes a direct hit from a V2 rocket and is completely demolished. The bus was also destroyed in the hit and Harry wakes up in a hospital, seriously injured. But a nagging feeling tells him that Ellis is still alive, buried in the debris of the destroyed pub and Harry decides he must venture underneath the rubble to find and save his brother. While still in hospital, Harry meets a 14-year-old girl named Agatha, who had been a Kindertransport child in 1939 and now wants to find her parents, whom she believes are now in London.

Together, a semi-delirious Harry and a determined Agatha venture forth through the bombed and burning streets of London to find the remains of the White Horse in order to rescue Ellis and reunite Agatha with her parents. Throughout their journey, Harry stops to take the time to document everything in his notebook, which already includes copious, detailed illustrations for a planned science-fiction book called Machines of War.

Harry's journey into London's underworld to reach his brother has parallels to the myth of Orpheus and his journey to the Underworld to bring his wife back from the dead. Not surprisingly, Harry's notebook entries are explained and made clear through free verse poems by a poet named Orpheus. But who Orpheus is here is a mystery (until the end, but even then, I questioned Orpheus' identity here).

Voyages in the Underworld of Orpheus Black is not an easy book to read. It can feel confusing and muddled at times, but it is so worthwhile to stick with it to the end. This is clearly an anti-war story, catching all the particular horrors of World War II, and in fact, all wars. The Sedgwick brothers have created a hero in Harry Black, which is not surprising. Apparently, their father, a Quaker, was a conscientious objector during WWII and it is clear they consider him to be a hero for taking a stand against war that was seen as almost treasonous during WWII.

This is a carefully crafted story, part graphic novel, part verse novel, part prose novel, seemingly told from three different points of view - Harry, Orpheus, and, to a lesser degree, Ellis. Each part, each person ties into the other, adding to the story, and creating plenty of intrigue.

I found myself really caught up in Harry's first person narration, even at his most muddled, but I could have done with less of Orpheus and his songs. At times, I felt they interrupted the flow of the story too much. Also, it didn't take me long to figure out the mystery of Agatha, but maybe that was supposed to happen. After all, she pushed Harry along to act before it was too late to rescue Ellis.

Students will one day have a field day analyzing the meaning of this novel, the themes, the metaphors, the veiled references to reality contained in Harry's Machines of War work-in-progress, and the illustrations, which are so much a part of the story, don't gloss over them. The ones done in blues and whites are Harry's illustrations for his book, the black and white illustrations represent reality and belong to the story being told.

All told, I really enjoyed reading this book. It was a harrowing journey to the end but it had the kind of very satisfying, emotional ending I find appealing in books like this. And since I don't find too many really good alternative histories that take place in WWII, this was a very welcome addition to that particular genre.