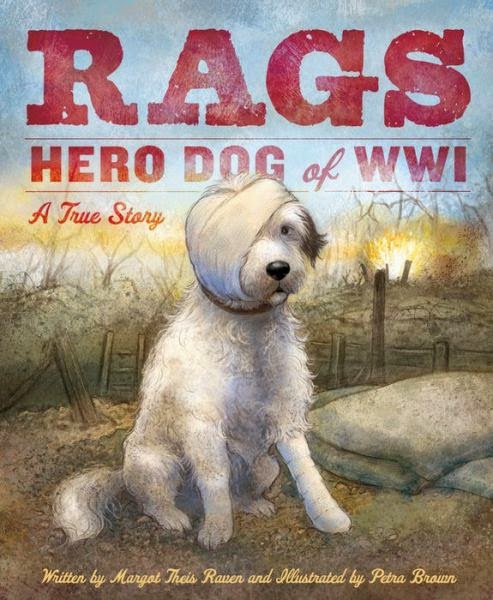 This is the story of a mongrel dog who was surviving by his wits in Paris when he was found by an American soldier named James Donovan during an air raid after the Americans entered WWI.

Private Donovan felt sorry for the hungry, scruffy, scared pup, giving him the very suitable name Rags.  When the air raid was over, Donovan took Rags back to his army base, where he was ordered to pack up this gear so he could leave for the battlefield that night.  And yes, Rags went with him.

It didn't take long for Rags to become a favorite with the soldiers and to adjust to infantry life in the trenches.  He was immediately put to work, chasing mice and rats out of the trench where Donovan was fighting.  Donovan was a radio operator and soon Rags was delivering important messages all up and down the trenches.

It didn't take long for Rags to become quite the hero.  In October 1918, little more than a month before the war ended, Donovan and Rags were both seriously injured in a terrible battle, but not before Rags got a message through that helps the Allies win the battle.  At the army hospital, a kind doctor found Rags and took care of his injuries.  From then on, Rags was blind in one eye, deaf in one ear and walked with a limp.  Sadly, Donovan did not survive his injuries.

Rags: Hero Dog of WWI is really a picture book for older readers, though there are not real resources at the back of the book.  It is well written, but though the story is based on an actual dog, it is really historical fiction.  Still, it is an inspiring work and is sure to please kids who like animal stories.  By the same token, it introduces the reader to some of the horrors of war in a gentle, age appropriate way.

The soft, muted realistic illustrations by Petra Brown are sure to tug at the heartstrings.  I know they did mine. 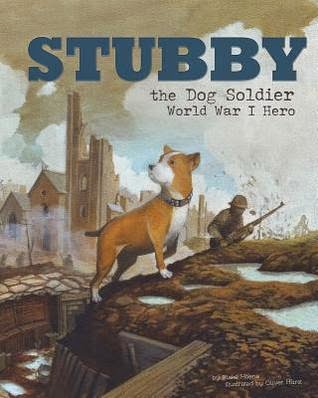 Like Rags, Stubby (named that because of his stubby tail) was also a scruffy stray who began to follow Private J. Robert Conroy around his army base in New Haven, CT after Conroy had given him some leftover food.  Soon, Conroy made a place for Stubby to sleep under his bed and a friendship was born.  It didn't take long for Stubby to become the mascot of the 26th Infantry Division and in August 1917, he sailed to France with the soldiers.

On the battlefield, Stubby's keen sense of smell served as a warning when the enemy starting using mustard gas to attack the soldiers.  The mustard gas would have burned their skin and lungs so they couldn't breath if Stubby hadn't warned them.  Soon, the soldiers learned to follow Stubby's cues.  He sense of hearing warned them when a bomb was coming so they could take cover, and he even helped capture a German soldier crawling over no man's land to drop a grenade in the trenches.

When the war ended, Conroy went to Georgetown Law and Stubby went with him, becoming the football team's mascot.  Stubby died in 1926.

Stubby the Dog Soldier, World War I Hero is a similar story to that of Rags, but for younger readers.  It too is well written and straightforward, with back matter that includes a glossary, books for further reading and even a Critical Thinking using the Common Core section.

Oliver Hurst's oil painted and pencil folk art type illustrations are done in a palette of browns, greens and blues, giving Stubby's story a real feeling of the battlefield, where I don't imagine there were too many bright colors anywhere, since soldiers was to blend in the background.

Dogs were not officially used in World War I, but both Rags and Stubby were two of the exceptions.  In fact, each received a write-up in the New York Times when they died.

You can read the obituary for Rags HERE and Stubby's HERE (oddly located at the bottom of the page about the Metropolitian Museum of Art)
Posted by Alex at 9:31 AM