Finding Winnie: The True Story of the World's Most Famous Bear by Lindsay Mattick, illustrated by Sophie Blackall 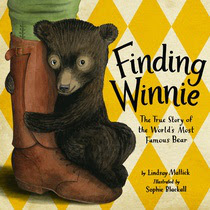 It's bedtime but young Cole still wants a story, a true story before going to sleep.  And so Cole's mother begins to tell him a story about Harry Colebourn, a veterinarian from Winnipeg who lived long before Cole was born.  When war begins far from Canada, Harry's veterinary services are needed to care for the army's war horses and so he joins the army.

When Harry's troop train makes a stop in White River, Canada, he sees a man with a baby bear and next thing he knows, Harry has bought the bear for $20.00 and names it Winnipeg - nickname Winnie.  Winnie is quite a hit among all the soldiers and proves herself to be a gentle, but rambunctious bear cub.  Eventually, Winnie travels with Harry all the way to England, where Harry and his fellow soldiers will train for war.

When Harry gets his orders and is about to be sent to the front lines in France, he realizes that a battlefield would be too dangerous for Winnie and decides to leave him at the London Zoo for the duration of the war.  It is, indeed, a sad parting between man and bear.

However, Winnie adjusts to life in the zoo and ever the gentle bear, he is popular with the kids who visit, and in particular, one boy named Christopher Robin Milne, who frequently comes to see Winnie with his father.  Christopher even names his teddy bear after Winnie, calling it Winnie- the-Pooh, and out of his love for the real bear comes the books by his dad about Winnie-the-Pooh's adventures with a young boy named Christopher Robin.

As for young Cole, well, he was named after his great-great grandfather - Harry Colebourn.

Finding Winnie is a nice all-in-the-family true story since Linsay Mattick is actually the great-granddaughter of Harry Colebourn.   Son Cole's request for a bedtime story, one he has clearly asked for and heard many times before, cleverly frames the real story about how the tales about Winnie-the-Pooh evolved and it is nicely connected to the present for young readers by Cole's relationship to Harry.  Mattick has even included a family tree so kids can trace the family's relationship.

In addition, Mattick has included photos and artifacts from the time that Harry and Winnie spent together, as well as a photo of herself and Cole at the back of the book.

Sophie Blackall's beautifully rendered watercolor and ink illustrations are bright, detailed and gently soothing, makinf for an excellent merger of story and picture that is sure to please even the youngest Winnie-the-Pooh fan.  She really has captured the affection between Harry and Winnie and Blackall's illustrations will elicit more than a few "ahhhs" for readers.  In fact, she has even made the illustration of the soldiers marching in the rain look not as dreadful as it probably was.

And I really liked that the story is always focused on Winnie and never strays into Harry's time on the western front, so there are no combat illustrations, even though this is technically a WWI story.

Finding Winnie is a lovely addition to any library, a terrific read-aloud (at bedtime, perhaps?), and the perfect introduction to the Winnie-the-Pooh stories for young readers.

And, yes, I know that Finding Winnie is the second book to come out this year about the true story of Winnie-the-Pooh.  Both are equally delightful, each one tells the story equally well, and the illustrations in each are every bit as good as the other.  What to do?  Read them both.  That what I did and even though they tell the same story, they are wonderfully different and I enjoyed both for different reasons.

This book is recommended for readers age 4+
This book was borrowed from the NYPL
Posted by Alex at 11:27 AM