A Boy Is Not a Bird by Edeet Ravel 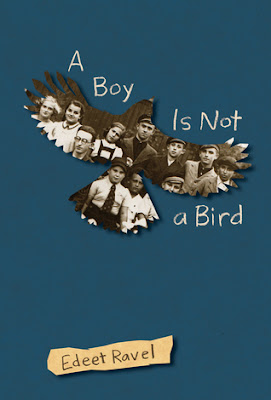 Living in Zastavna, Romania, 11-year-old Natt Silver, a Jewish boy with asthma, has had a pretty comfortable life. He has a loving family, a best friend named Max Zwecker, and he can already speak five languages: German, Ukrainian, Romanian, Hebrew, and Yiddish. The only thing that makes life difficult is the presence of Iron Guard, a nationalist, anti-semitic Romanian movement whose members resemble those of the Hitler’s Brownshirts. When the Iron Guard comes to town, everyone hides.**

Then in the summer of 1940, just like that the Iron Guard is gone, replaced by Soviet soldiers. Even the teachers at Natt’s school are replaced with Communist teachers. Life without the Iron Guard is better until the Communists arrest Natt’s father, along with 15 other men. While he’s in jail, Natt and his classmates are taught how to be Pioneers, causing him to be torn between love for his father, now considered an enemy of the Soviets, and being a good Pioneer.

While his father is in jail, Natt is sent to stay on a farm with friends of the family for his safety. But in the summer of 1941, when Natt is taken into custody and questioned about his mothers whereabouts, he honestly can’t tell them what they want to know. After a few days, his mother shows up, gets Natt released and they go home - to pack. Natt’s father has already been sent to a gulag in Siberia, and now Natt and his mother are being exiled to Siberia, along with thousands of others, all labeled as an “enemy of the people.”

A Boy Is Not a Bird is an eminently readable novel, in part because the author starts Natt off as a kid who just wants to belong, and who wants to be the best Pioneer he can be. He often misreads people and their motives, leading him to believe that everything will eventually be OK. Part of the reason Natt can hold on to his innocence for so long is that there are enough kind people in his life that really like this winsome 11-year-old. Interestingly, his best friend Max is just the opposite of Natt. Max's cynicism is the window of reality that Natt lacks, but that the reader needs. Natt, it turns out, is a wonderful observer but also an unreliable narrator.

It is, however, sad to see that little by little, Natt's innocence is striped away by the actions and behavior of others. As I read Natt's first person narration of what is happening around him, his naiveté reminded me so much of Felix from Morris Gleitzman’s Once series.

A Boy Is Not a Bird is a fictionalized story based on the ones the author's fifth grade teacher, Mr. Halpern, used to tell her class, about his childhood in Soviet occupied Zastavna. The novel ends with Natt's still on the train to Siberia, his future unresolved,  But take heart, this is only the first part of a planned trilogy. And I can't wait to read the rest.


**FYI: In 1939, Nazi Germany and the Soviet Union signed a non-aggression treaty generally referred to as the Molotov-Ribbentrop Pact. One of the things the pact did was define boundaries where each country had influence. But not long after Adolf Hitler invaded Poland on September 1, 1939, and effectively disregarding the Pact, Joseph Stalin launched also invaded Poland. As a result, new borders were drawn and in the summer of 1940, the formerly Romanian territory of Bukovina was divided between the USSR in the north, and Romania in the south. The Soviets demanded Bukovina in the north because it was mostly Ukrainian, whereas the southern part of Bukovina was mostly Romanian. And that is where this story begins. 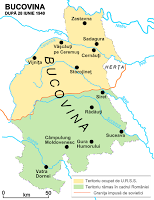