Winnie: The True Story of the Bear Who Inspired Winnie-the-Pooh by Sally M. Walker, illustrated by Jonathan D. Voss 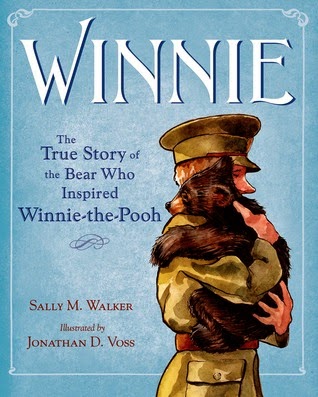 At the start of World War I, a young lieutenant named Harry Colebourn, who also happened to be a veterinarian, is on his way with his regiment to a military training camp in Quebec, when he sees a baby bear on a station platform.  He discovers that the baby bear is for sale, for only $20.00, and Harry decides he has to have it.

The little cub, whose mother had been inadvertently shot, is named after the regiment's hometown of Winnipeg, but immediately shortened to Winnie.  Winnie quickly becomes Harry's constant companion and his company's mascot.  Walker depicts Harry and Winnie playing their own version of hide and seek, Winnie sleeping directly under Harry's cot, and exchanging big bear hugs.

Even when the war worsens and Harry's regiment is sent overseas, Winnie goes, too.  And proves to be a good sailor all the way across the ocean, while Harry lies in bed seasick.  But when it is time to go to the battle front in France, Harry realizes he can't bring Winnie along, after all, she could get seriously hurt on the battlefield.  So Harry makes a tough decision - to place Winnie in the London Zoo for safekeeping.

Winnie proves to be such a gentle bear, that children are allowed to play with her and ride on her back.  The war lasts four years, and at the end of it, Harry has another tough decision to make - to take Winnie home with him or let her stay at the zoo, where she has so many friends.  He decides to let her stay at the zoo.  Winnie has one very frequent visitor named Christopher Robin, loves Winnie so much that he renames his teddy bear Winnie-the-Pooh, after which his father begins to make up bedtime stories about the adventures of Christopher Robin and Winnie-the-Pooh that eventually grow into a book.

The real events surrounding the relationship of Harry and Winnie are remarkable enough, but Sally Walker has told it in language the is simply and straightforward for even the youngest of readers to understand.  Jonathan Voss's soft watercolor and pen and ink illustrations done in a palette of browns and greens reminiscent of nature and the military compliment and provide a visual extension of the story.

Walker includes an Author's Note about Harry and Winnie, as well are sources and websites for further exploration.  Be sure to look at the photo's of the real Harry and Winnie on the endpapers.

This is a story the will delight young readers some of whom are already fans of the Winnie-the-Pooh books and perhaps make a few new ones.


Today is Nonfiction Monday - be sure to visit this week's roundup