Fly, Cher Ami, Fly! The Pigeon Who Save the Lost Battalion by Robert Burleigh, illustrated by Robert MacKenzie 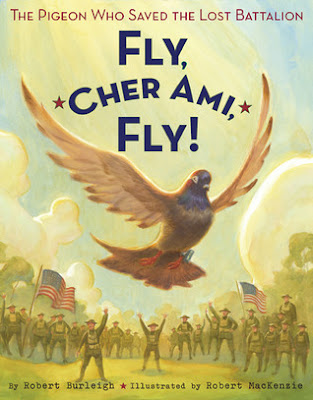 During World War I, carrier pigeons were frequently used by the army to deliver important messages because of their innate ability to find their way home, even if it means flying over ground combat and going great distances. For one lost battalion, it was a matter of life and death.

In 1918, a battalion of the US infantry was fighting in France, surrounded by the enemy, when their radio communications went out. No one knew where these soldiers were located to send help and rescue them. There was only one chance to save themselves - send a message back home, attached to the leg of their last carrier pigeon, Cher Ami.

Flying through gun fire aimed at him by a German soldier, Cher Ami managed to avoid being hit and kept flying. Even when the Germans send a hawk after the pigeon, he managed to fly at the sun and blind the hawk just before it could sink its talons into the pigeon.

Arriving at the army's base in England, Cher Ami delivers his message, and as the army prepared to rescue their fellow soldiers, Cher Ami found his nice comfortable nest for a hard earned rest and a job well done.
There are lots of versions of Cher Ami's story out there, but this one is aimed at young readers who probably don't know a lot about war in general, and WWI in particular. And it really doesn't give much information about war, nor is much needed. What this book does do is give kids a nice, age appropriate fiction biography of one famous heroic carrier pigeon and highlights the importance of the role they played for helping soldiers in dangerous situations (although they did more than what this story shows).

Burleigh doesn't give details about the battle that the battalion was involved in, not does he give names to any of the soldiers. This is definitely Cher Ami's story. Cher Ami's tale is complimented by the realistic illustrations of Robert MacKenzie, which are done in a palette of mainly browns and burnt oranges for the battlefield and dull smoky blue for the sky, presumable from all the weapons being shot.

I do have one problem with this fictional bio. We see Cher Ami being shot at, but the reader is not told that he is hurt. Cher Ami was actually seriously wounded on this trip, which proved to be his last. He didn't die, but one of his legs was badly hurt, so doctors fashioned him a wooden prosthetic leg to replace the injured leg. I would have like to see this within the story, not pushed in an Afterword at the end of the book.

As a book about carrier pigeons and what they are capable of, Fly, Cher Ami, Fly! would be an excellent teaching tool. It would also be useful as part of a WWI unit, but not as a primary resource.

A Cher Ami Coloring Book is available to download for free at the Home of Heroes, where you can also read more about the Lost Battalion of WWI

This book is recommended for readers age 5+
This book was purchased for my personal library
Posted by Alex at 8:23 AM