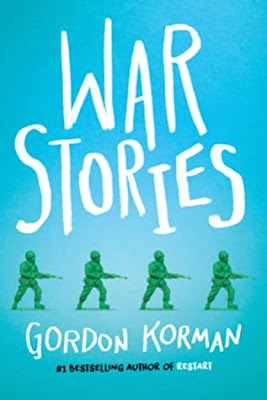 Much to his parents chagrin, twelve-year-old Trevor Firestone can't get enough about World War II - it's the subject of the video games he plays, the models he builds, the books he reads. But Trevor especially loves hearing the soldier stories his 93-year-old great-grandfather (G.G.) Jacob tells him after he  enlisted in the army at the tender age of 17.
Trevor always considered G.G. a war hero, but now it's the 75th anniversary of D-Day and 1944 Normandy invasion. And G.G. has been invited to the ceremony at Sainte-Régine, where he is to be the guest of honor as the only surviving member of his unit that participated in the battle that liberated the town from German occupation.
Now, Trevor is about to embark on a dream trip with his dad and G.G., retracing his grandfather's WWII journey that began when he lied about his age to enlist, then found himself at Fort Benning as part of Bravo Company, where he immediately earned the nickname High School, and ends 75 years later.
Before they even leave Connecticut, Trevor's dad is worried about some messages posted on Facebook. Messages like "Stay in America, Jacob Firestone" and "Sainte-Régine will never forgive you." But what could these messages mean? All G.G. will say is "If this is the past catching up to me, so be it. I've been carrying it around for seventy-five years."
As the trio of Firestones arrive at each milestone in G.G.'s army career, the story switches to 1944 and what actually happened. Sometimes this kind of alternating timeline can be so annoying, but Korman has really handled it well. Everything they do in contemporary time mirrors what happened to Jacob in 1944. In War Stories, their parallel journeys give the reader a real picture of war without a lot of explanation that would take away from the story.
Once the Firestones get to France, things start happening - incidents like slashed tires, and a dead bird under their car's windshield wipers. As they get closer to Sainte-Régine, the Facebook messages take on a ominous threatening tone. And Trevor has been noticing a blond girl about his age everywhere they stop. Coincidence? He thinks not, but who could she be and why does she seem to be following the Firestones?
I always enjoy reading Gordon Korman novels and sharing them with young readers. They are usually fun and whimsical but always with a great message sandwiched in them. And while War Stories still retains some of the signature Korman humor, it's a much more serious book.
In the chapters that are about Jacob's time in the army, Korman makes no bones about the horrors of war and the toll it has on people's lives. It's a lesson Trevor has to learn, and he does, slowly as they follow in G.G. experiential footsteps.I think WWII is an important part of world history and the part that each country played in it. However, I'm not a fan of violence and war. True to my Quaker roots, I am a pacifist.
Trevor is a great character, who isn't as narrow a thinker as he at first appears. Away from his game controller, he's able to look around him and see what the world is really like. And thankfully, Korman lets him come to his own conclusions about the things he learns on his dream trip. His dad a great character as well, but ironically, it's Jacob Firestone who is the real MC. He's a richly drawn if flawed character, both as both an overly zealous 17-year-old soldier and as a crusty 93-year-old nonagenarian. His wartime experiences are grim and realistically presented. But when he recognizes that the enemy is a teen just like him. it leads terrible consequences, leaving readers to wonder if G.G. really deserved the bronze star he earned and to be honored at Sainte-Régine.
It should be mentioned here that G.G. is Trevor's dad's grandfather, who had raised him after his parents died, and explains how a 12-year-old in 2020 has a relative who fought in WWII. It may seem like a stretch, but I have a 94-year-old uncle who is grandfather to a high school student, so I had no trouble with the aging here.
War Stories is a novel that will remind readers that while war games have no permanent consequences, real life war does, and those consequences can last a lifetime.
This book is recommended for readers age 9+
This book was an E-Galley gratefully received from the publisher, Scholastic Press, and EdelweissPlus
Posted by Alex at 2:05 PM