The Valley of Lost Secrets by Lesley Parr 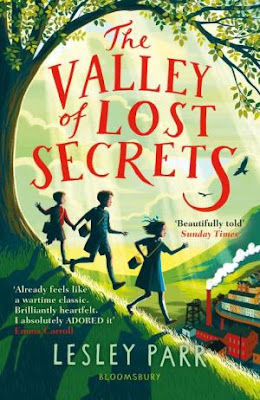 It's 1939 and England is at war with Germany. For Jimmy Travers, 12, and his younger brother Ronnie, 6, that means evacuation, leaving their dad and Nan behind in London for a village called Llanbryn in South Wales along with the rest of their school to be taken in by strangers. Jimmy's best mate Duff and his sister are chosen right away, and even Florence Campbell, a girl no one wants to have anything to do with because she and her clothing are always so dirty, is chosen before Jimmy and Ronnie.

Jimmy has been worried that he and Ronnie will be separated, chosen by different families, but luckily, a woman named Gwen Thomas decides she will take the brothers in even though she only wanted on child. Gwen and her husband, Alun, who works long hours in the Llanbryn coal mine, have no children of their own but are very kind to the boys, even though Jimmy refuses to accept them as Aunty Gwen and Uncle Alun, believing he will be home by Christmas. On the other hand, Ronnie adapts easily to valley life and seems to adore Aunty Gwen right off the bat.

It's a while before Jimmy sees his friend Duff, and much to his dismay, Duff has changed. Hanging around with the Vicar's son Jack and three other boys, the five of them go around bullying other kids. But to his real amazement, the next time Jimmy sees Florence, her hair, body and clothing are clean, she's happy and helping out in a shop, where the owner, Mrs. Hughes, is teaching her how to make Welsh Cakes.

Jimmy returns to the tree, and to his surprise, is discovered by Ronnie, who has followed him. When he shows Ronnie the skull, it scares him and he wets himself. Naturally, that's when they run into Duff and his new gang, but it's Florence who punches Jack in the face defending Ronnie and leading to a new friendship between her and Jimmy.

When money goes missing from the Vicar's church, St. Michael's, people suspect it was stolen by the evacuees. It's clear they are welcomed by some people in Llanbryn, but not others and that there is a deep division between the people who go the St. Michael's and those who go to chapel, like the Thomas and the Hughes families.

But it's the skull in the tree that holds Jimmy's attention, a secret he shares with Ronnie and Florence. When Jack's gang finds Ronnie at the tree by himself, they decide to kidnap him. Making a slip about the skull, they try to get that information out of him. Luckily, Jimmy and Florence find Ronnie before they hurt him too badly. Later, when Duff tries to pal up to him again, Jimmy knows he's being played and gives his former friend incorrect information about the skull.

But Jimmy is still determined to find out who the skull belongs to and why is it in the tree? And perhaps, of all people, Alun Thomas has the answer.

This is one of those stories that drew me in immediately. First, I love a story set in South Wales, and second, I love a good evacuee story and this is certainly that. I was happy that Gwen and Alun turned out to be kind and caring, even if there was some resentment in the village about the London evacuees. And Jimmy is an interesting character, unhappy about leaving his dad and Nan, resistant to letting himself settle in too comfortably with the Thomases, and very affectionate and protective of his younger brother.

The Valley of Lost Secrets is a debut novel for Lesley Parr and clearly she knows her setting. Llanbryn is a fictional village, but it could easily have been Pontycymmer, where my dad grew up. My dad was raised chapel like the Thomases and Hughes families, and I'm not sure American readers will understand the difference between church and chapel that is talked about but that is a small part of the story and probably won't cause any lost of interest in Jimmy's story.

Though this is a really great middle grade adventure/mystery with plenty of humor, Parr has explored some important themes in this novel, such as what makes a family and a community, forgiveness and acceptance, loss and guilt, courage and cowardice. The Valley of Lost Secrets is perfect for fans of Nina Bawden's Carrie's War, Michelle Magorian's Good Night, Mr. Tom, Emma Carroll's Letters from the Lighthouse, Kate Albus's A Place to Hang the Moon, and Kimberly Brubaker Bradley's The War That Saved My Life - all evacuation stories, all unique.

This book was purchased for my personal library.